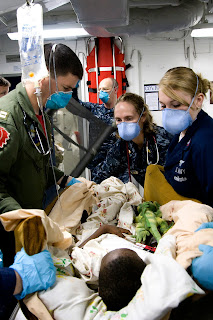 During this afternoon’s DoD Blogger’s Roundtable U.S. Navy Capt. Bruce H. Lindsey, commanding officer, USS Carl Vinson explained the aircraft carrier’s pivotal role for operations in support of Operation Unified Response (Haiti). A great opportunity to talk to the Captain while he was directing operations on the carrier located in Port-au-Prince bay area.

I am going to start off with a great story of technology and with a twist that will touch the hearts and souls of America. I asked the Captain to relay something to America that would in fact touch our hearts and he said he had a great one. A group in Grand Rapids, Michigan emailed the USS Carl Vinson and said they had been in contact with personnel on an island in the bay that needed help. Most of the focus of the relief efforts had been in Port-au-Prince and the interior of Haiti but this small island had received significant damage as well. The Vinson sent an aircraft to recon the island and then discovered an adequate landing zone for an SH-60 to land. The helicopter medevaced three casualties from the island due to the reach of a group from Michigan! Quite a story and yes it does touch our hearts. I am writing this blog about 20 miles south of Grand Rapids and I do not know the group who sent the email but I am amazed by their resourcefulness and care!

Another great story was the birth of “Baby Vinson” aboard the ship! I bet the medical personnel were not expecting to deliver babies or care for newborns during this deployment! The question for legal scholars will now become, is this an American citizen?

The Vinson had just left port on January 12th for a deployment with their normal aircraft when they were diverted to Haiti. Going at 30 knots plus to reach the area they passed Mayport Naval Station in Florida to disembark their F-18 fighters and embark more helicopters. They now have 19 CH-53s and SH-60s on board. The heavylift H-53s are doing great ship to shore relief work and the H-60s are the primary medevac aircraft due to their ability to land in the smaller landing zones. The Captain emphasized the excellent coordination being accomplished by the medical surgeon team with Gen Keen, the US commander of forces in Haiti. The on island medics do triage for injurie 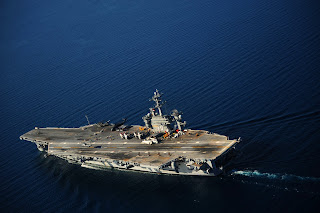 s (mostly broken bones and head injuries) and assign the pickup location, helicopter type and hospital or ship destination. The USNS Comfort as a hospital ship is the primary care giver but only has two helicopter spots so some critical patients might be landed on the USS Carl Vinson, USS Nassau or USS Bataan with their additional medical capabilities and helicopter landing spots.

The Vinson’s helicopters have flown 60+ sorties a day for the last two days and today is expected to be about the same. With each sortie the helicopter crews accomplish 3-4 landings in different landing zones picking up patients, dropping of supplies, or delivering patients to medical facilities. The helicopter maintainers are doing a terrific job of keeping the sortie rate high with their efforts according to the Captain.

While responding to one question from a blogger Captain Lindsey said that the Non Governmental Organizations (NGOs)were providing a great service by connecting the Haitian people with the military resources. Their synergy creates a great team and shows the in depth efforts of the international team. The Vinson has Haitian language personnel on board who provide a link between the patients and the medical staff which they find very comforting. In addition they have 12 teams of 10 personnel that travel inland each day to help unload supplies at the landing zones and help load patients as well. A great effort from a great team on USS Carl Vinson! We are very proud of you and thank from America!

To listen to the Roundtable please go to DoD Live! 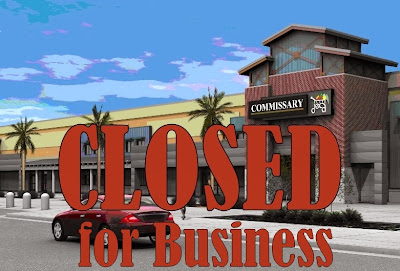