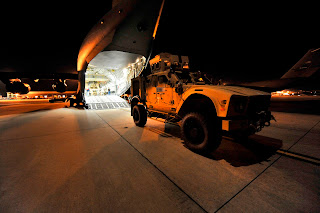 The DoD Bloggers Roundtable met with Maj General Robert McMahon, Director of the Central Command Deployment and Distribution Center (CENTCOM DDOC) to discuss the logistics of surging in Afghanistan and drawing down forces in Iraq. With direct oversight of strategic logistics in both locations the general has quite a job. When queried about the effort he said he has a great team of professionals from the Guard, Reserves and Active forces to run the Center and keep track of the passengers, equipment and supplies moving through the system in and out of both countries. In addition, he thanked the Defense Logistics Agency and Transportation Command at Scott AFB for their great efforts to keep the flow moving into and out of the CENTCOM region.

One item of special note that military families will have special interest in was that the center is the agent responsible for R & R (Rest and Relaxation leave) travelers! With a son in law who returned home from Iraq using this system I was glad to hear it was a priority and fo

cus at the center. The center uses a spoke and hub airlift plan to move the travelers and our experience was that it worked pretty well! One delay in Atlanta after being bumped off a flight was the only hitch during deployment, R & R and redeployment for Paul. They also have a single ticket plan that provides a method for reaching your destination that is particularly helpful for individuals not involved in unit moves such as reserve IMAs (individual mobilization augmentees) that are enroute their destination without a military unit. With a single ticket you have a schedule for reaching the end versus arriving at a port and waiting “for your ship to come in”.

The logistics flow at the center uses air, land and sea to meet the needs of theatre forces. They also use a mix of trucks and rail for the land portion and commercial resources for all three which he described as essential to meeting the requirements. When I asked if he had enough aircraft to move the requirements he said the command demand for air was always infinite but that they were generating 1,000 pallet positions a day to meet the needs with C-17s and C-130s. Airlift moves critical supplies and equipment such as MRAPs (Mine Resistant Ambush Protected) vehicles and MATVs (Multipurpose All-Terrain Vehicles) to expedite their movement and avoid some of the long ground routes into Afghanistan. He added that commercial lift is used to augment our organic military capability.

Did you know we were using land/rail routes through Russia, the land bridge between the Black and Caspian Sea, and the Central Asian States into northern Afghanistan? This route has better infrastructure including rail lines and keeps a “second gate” open for the transportation system to use which is always critical during any conflict. The transportation gate through the port of Karachi in Pakistan is hampered by the highways (which do not meet what you might consider a definition of highway) through the mountain passes in between Afghanistan and Pakistan. One listener asked about what cargo could be moved through Russia including lethal supplies (ammunition, etc) and the general maintained that airlift provides the method of choice for sensitive cargo.

This Roundtable topic had the potential for a lot of very sensitive information and I was impressed with how it was handled and the participants respected the subject and its possible impact on our men and women at war. Only one question was not answered due to OPSEC (operational security) reasons by the general. Accolades to all involved!

One long term side effect of the US logistics flow into Afghanistan is the improvement of their infrastructure for the future. With the improved rail lines, airports and highways the Afghan commerce (and lifestyle as well) will improve. No economy can improve without these lifelines to the world and their improvement will have a long term impact on this country’s viability and strength similar to what I wrote earlier about concerning Iraqi agricultural improvements (Success in Iraq?? Where we are today – DoD Bloggers Roundtable). When I flew into Kandahar and Bagram in 2001 they were austere airports with limited capability and required a crew that was really at the top of their game! As we have added new improvements to roads, the rail lines in the north and airports we have made it easier to get an education, be in touch with the outside world, make womens’ and childrens’ lives better and much more! In the end our hope is for a better country and more security for us with a modern Afghanistan and Iraq!

A big thank you to all those currently serving in these countries, in the air, at sea or providing the resources they need! The world is a better place because of you!

The New Media Directorate is to be applauded for their efforts to keep us informed with such great leaders meeting with us! A shout out to the coordinator, Lt Cragg and team! If you would like to listen to to the audio or read a transcript please go to DoDLive! 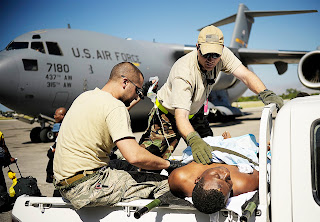 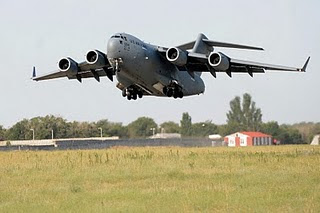