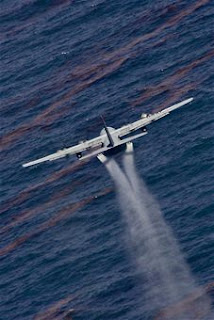 It is easy to forget the quiet professionals, not to recognize those who treat you politely or give you great customer service. Sometimes we are too busy or we just fail to respond when we should say thank you. This could not be truer than for three Air Force Reserve Command (AFRC) C-130 aircraft missions that we rarely hear about because they are quietly and professionally doing their jobs in the background of natural or manmade disasters such as hurricanes, large fires, insect infestations and oil spills. They mitigate the disasters with unique (and sometimes venerable) equipment and training to penetrate hurricanes, drop fire retardant in difficult terrain, spraying at low level for mosquitoes or covering oil slicks with chemical agents.

This group of airmen just got together for a conference to bring their common issues, tactics and experiences to the forefront. There were discussions on command and control, lessons learned, similarities and commonality. Officially their unique efforts are known as Defense Support to Civil Authorities (DSCA) missions. I talked to the commander and leaders of these airmen during a Defense Department New Media Blogger’s Roundtable and came away even more impressed than I had been due to personal knowledge of the requirements of some of their missions.

r, Lt Col Jonathan Talbot, representing the Hurricane Hunters in the 403d Wing, Lt Col Steve Condit, representing the fire fighters of the 302nd Airlift Wing and Capt W. Travis Adams, Assistant Chief of Aerial Spray of the 757 Airlift Squadron. Thank you to each of you for representing the 22,000 airmen of 22nd Air Force so well!

I asked General Rubeor if they were having any difficulties with maintaining training currencies with so many commitments and he said “no” but that part of the purpose of the conference was to identify “efficiencies” that were common to all to three missions. One need for the efficiencies is to support new taskings such as the spray mission following the Deepwater Horizon oil spill in the Gulf of Mexico. Normally, the insect spray can be spread at a higher altitude and airspeed to cover a larger area. The oil spill chemicals had to be dropped lower and slower to hit the targets which were being identified by other slower moving search aircraft. The C-130s flying the mission would normally spray at 200 knots and instead were operating at much slower speeds (around 150-160 according to the captain) and being directed to turn by other aircraft which makes it even more difficult of a maneuver! This requires experienced airmen which AFRC has!

Were you part of the winter storms along the East Coast at Christmas? Did you know the Hurricane Hunters of the 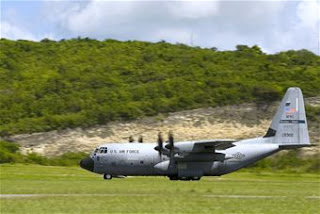 403d flew four missions in those atypical storms to provide better data to the forecasters so they could alert authorities and citizens what to expect? The states, counties and cities were better prepared with information to time their response (this certainly was a nightmare storm for many travelers). These brave aviators are kept very busy while chasing hurricanes and penetrating them (which all aircraft flight manuals and FAA/Air Force regulations say to avoid) to keep our citizens out of our harms way but are add 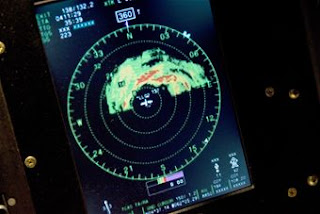 ing new missions as well. They are also now flying missions over the Pacific in the winter to gather data over the storms that form there and move over the US. They are dropping weather buoys to gather data where no weather stations are available and in areas that improve the accuracy of our weather forecasts. 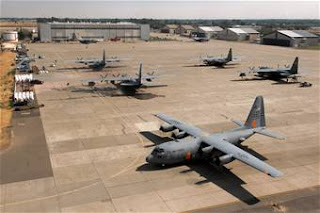 prepare for the major fire fighting season to come. Another difficult mission requiring highly experienced aircrews and support personnel the Modular Airborne Firefighting Systems bring flexibility and quick to respond capability for the US Forest Service and our citizens in fear of losing their homes and resources in a forest fire. Dropping fire retardant in the mountains, near a large fire, at low altitude and hitting the target precisely is key to successfully winning the battle, supporting the ground fire fighter and ending the threat to our citizens’ homes, businesses and livelihoods. Maneuvering their C-130s in these conditions requires a professional airmen (and maintenance team to provide a fully operational and safe aircraft).

General Rubeor said the Citizen Airmen were an “incredible bargain for US taxpayers” and that he was very proud of them! So the next time you read about or are in a hurricane, massive winter storm, forest fire or other calamity, just know that the US Air Force is protecting and saving lives! If you would like to read a transcript of this interesting Roundtable or listen to an audio please go to DoD Live. For more detail on these missions go to AFRC News! Thank you General Rubeor and your leaders for taking the time to talk to the Bloggers Roundtable and sharing the story of your airmen!

Photo Credits: A C-130 Hercules drops an oil-dispersing chemical over the Gulf of Mexico as part of the Deepwater Horizon Response effort May 5, 2010. Members are from the Air Force Reserve Command’s 910th Airlift Wing at Youngstown-Warren Air Reserve Station, Ohio. The unit specializes in aerial spray and is the Department of Defense’s only large-area, fixed-wing aerial spray unit. (U.S. Air Force photo/Tech. Sgt. Adrian Cadiz)

Photo Credits: The radar image of Hurricane Igor’s eyewall onboard a WC-130J Hercules keeps Airmen from the 53rd Weather Reconnaissance Squadron busy over the Atlantic Ocean, Sept. 17, 2010. Known as the “Hurricane Hunters,” the 53rd WRS mission is to provide surveillance of tropical storms and hurricanes in the Atlantic Ocean, the Caribbean Sea, the Gulf of Mexico and the central Pacific Ocean for the National Hurricane Center in Miami. (U.S. Air Force photo/Staff Sgt. Michael B. Keller) 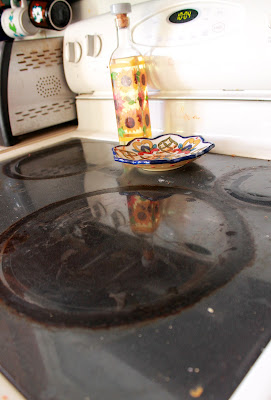 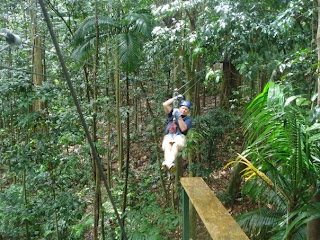