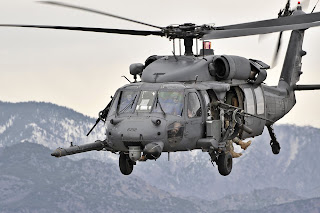 I have to admit to being very impressed. A general officer in the US Army writing a blog about what is happening in Afghanistan! So maybe his public affairs officer is helping? Might be a bit of pessimism in my blood; confirmed by my bride of almost 40 years! Deb blames it on Harry Reasoner and his famous news commentary in 1971 about the Vietnam War including the line,

USAF HH-60G in Afghanistan Since I flew helicopters for many years (including the HH-60G Pave Hawk to the left), I tend to look at things differently but I do laugh a lot and enjoy life so maybe it doesn’t really fit. So back to Maj Gen Peter N Fuller, Deputy Commander for Programs, NTM-A who I have yet to introduce. Gen Fuller met with the DoD Bloggers Roundtable and demonstrated a keen awareness of the social media by writing a blog before the Blogger Roundtable!

Maj Gen Peter N FullerIt is ironic we are talking about the war effort in Afghanistan as we approach the 10th anniversary of 9/11! I went to Afghanistan early (in 2001) – it was an airlift mission in a C-17 with night vision goggles, tactical descent/approach to a dark airfield at Kandahar and Bagram. The general spoke of an Afghanistan very different 10 years later! In charge of building the infrastructure of the Afghanistan military, he has a huge budget ($3B for infrastructure, $3B for equipment, $1B for training, and $3B for sustainment.) to control and monitor; to ensure the resources (our national treasury) are used in a smart and thoughtful manner to build resilience into the Afghan Security Forces.

How best to do that? The general said they do it by considering the following three concepts: Is it Afghan “Right”, Afghan “First” and Afghan “Like”

Afghan “Right”: Everything should be designed and built for Afghan requirements. A simple example he spoke about was when the Corps of Engineers built restrooms with very nice porcelain sinks and the Afghans were using them to wash their feet for prayers. Not right for Afghans. More complex capability requirements such as jet fighters, tanks, not Right, they can not afford them. They are not like NATO or the US and so it must be right for Afghanistan before we spend money on it!

Afghan “First”. Projects should generate home grown industry for the Afghans. He cited another example, this one done correctly, of switching from US procured uniforms, boots, equipment bags, to an Afghan female owned and female operated company. The company is growing, building quality into their products! It has health care, child care and food on site for its employees!

Afghan “Like” Maintain the equipment, vehicles and infrastructure that has been provided to help Afghans! Remember the old adage that if something is yours, you take better care of it? The Afghan mentality needs to recognize that the resources must be taken care of and that they are not limitless. He spoke of examples of vehicles that needed to be turned in for maintenance to get fuel credit which had been stopped to develop discipline among the leadership. 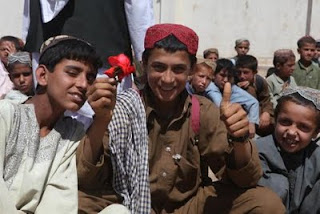 Afghan children at schoolSo are we on track to make these concepts work? He said the biggest challenge for him is developing the bureaucracy that supports the infrastructure. The biggest challenge for the country and its security forces is literacy! I could hear the pride as he described the number of kids in education versus 10 years ago! Currently there are 8 million Afghan children attending classes and 2.3 million are girls! Quite an accomplishment for the Afghans with a 14% literacy rate! He went back to Afghan “Like” for literacy training! It costs $39 per student in the armed forces to be taught to read at the first grade level. The classes are critical for the ability to even be able to tell which piece of equipment is theirs. 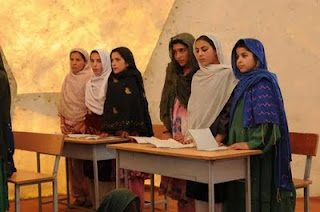 Middle School students readingBy November of 2012 the Afghan Army and Police will be at full strength of 195,000 and 157,000, respectively. The Air Force will be complete in 2014-2015 based on technical requirements. Did you know there are four Afghan women in the US right now attending pilot training! Wow! What a change for a country and what an opportunity to make it in the modern world with Afghan Right Afghan First and Afghan Like!

This Roundtable was very interesting and covered so much it is not possible to cover it all in this blog! If you would like to listen to an audio transcript or read the transcript go to DoDLive. To follow General Fuller’s Blog go here. To find more DoD Blogger Roundtables from Col K go here. Thank you DoD New Media for another great Roundtable!


Just another day at work 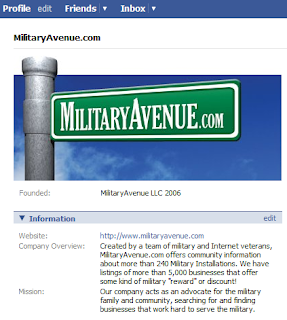