My deployed-Hubby is quite frequently asked by family & friends for things he might want sent to him in care-packages. He has told me on several occasions that they just don’t have a lot of room out there. His ‘choo’ (aka room) doesn’t have a lot of room & the Army does take pretty good care of their food-needs. I frequently ask what was for dinner and it sounds like the Army has come A LONG WAY from the days of *MASH* and their chow-hall. 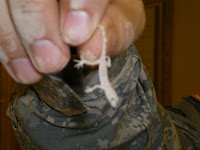 Apparently they have quite a few ‘critters’ over there. This was news to me. I think of the desert and I think of cactus, lizards & camels. But yes, they do have mice, lots of them. So if food isn’t properly contained they have a sudden infestation. That is enough to send a chill up my back and make me want to stand on the kitchen-table.

I was sending him random junk-mail … not credit-card offers, but alumni magazines, trade-magazines, etc etc but he said they have to burn anything with an address on it and really anything he wants to read he can get on the Internet. (He is lucky enough to have it in his room.) So now I have to throw-away junk mail instead of forwarding it on. Oh well… it was worth the shot 🙂

He said one of the best things people can ‘send’ is to make contributions to the USO. Apparently, they put on some pretty good programs for their battalion and entire base. He would like to see them continued. Between the USO and MWR they have some really entertaining programs (small and large) that help their time pass a little faster.

I realize that a donation to an organization isn’t as personal. I struggle with it as I want to send a piece of HOME; but this is what Hubby said and he is who the ‘gift’ is for. If your deployed loved-one is in the same train-of-thought as Hubby … the cookies just won’t make it across the ocean followed by the 130 degree temperature of the desert… (The LARGE box of oatmeal cookies & trail-mix that my dear-grandmother made for Hubby had turned into pretty much sandpaper before he got them.) … a monetary contribution of some sort might be the answer! Follow it up with a letter or an email. You aren’t boasting; you will make them feel good knowing that you want to make his (or her) deployment-experience a memorable one. (And to keep the mice (EEK) away from his ‘choo’.)

Email ThisBlogThis!Share to TwitterShare to FacebookShare to PinterestMilitary Life:care packages,deployment,Leanne,USO