Warning: for the squeemish I do have a pretty graphic picture below, involving a bit of blood. All in the ‘day in the life’ of a boy… but not exactly a pretty picture.

Hubby can not get home a day too soon!

My six year-old missed school on Thursday and Friday due to a pretty rotten cold and temperature ranging from 99 to 103 throughout the day & night. So our days have just been messed up. Unfortunately, on Friday night I started to feel the same way; achy, hot yet shivering, with a major headache. I love it when the kids share, but they don’t need to share their germs with me. Seriously now.

So when a neighbor & good friend called on Saturday to find out what I was doing Saturday night she could tell I wasn’t feeling great. She quickly changed plans and offered to take the boys (both feeling worlds better) for the afternoon so I could have some ‘me-time’.

Lori packed up my boys & hers and headed over to a friend’s house who has a gaggle of kids of her own. I had just turned on the water for a bath — to ease some of the pressure in my head when the phone rang. Lori called to say “everything was fine” but Christian, 3 years old, had fallen and his tongue was really bleeding. Then I could hear him screaming in the background.

Immediately, I headed over to calm him down and access the damages. By the time I got there they had Christian calmed down pretty well but once he saw me he started crying again. He literally bit through his tongue. It was gross, bloody, messy, many tears of course. (Even I wanted to cry.) He tripped on a stair and went chin first into the next stair.

So off to the emergency room we went. We had toyed with it. Discussed it. What can they do for a tongue? But I decided I didn’t want to chance it and just get a little verbal reassurance from a doctor as to the best thing to do. Lori wanted my older son to stay with her but he was shaken and wanted to stay with me. So she declared she was coming too. So the three of them, Lori, Elijah & her 4 year-old sat in the waiting room for at least 90 minutes. 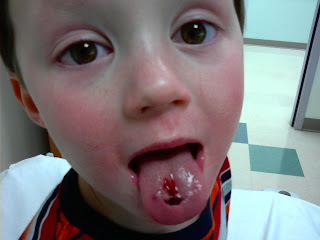 Christian is my fighter. He hates the doctor, abhors the dentist. There is usually much crying & gnashing of teeth when either is involved. So the fact that he wouldn’t really open up too well for the doctor was no surprise. When no one was in the room I pulled out my cell phone to snap a picture of Christian’s mouth. I told Christian to show Daddy his tongue… and he stuck his tongue out the furthest he had all night. I guess he wanted to show Dad what a tough guy he is!

Once we did see the doctor she said she did get a good enough look. What we can do is put him on a liquid diet for 3 or 4 days. She didn’t want to do stitches. Hopefully the bleeding will stop by morning. Oh and by the way… he has a double ear infection. Poor boy!

So at 8pm “Saint Lori”, as I have officially dubbed her, was out running to the store for yogurt, icecream & pudding for my little-trooper; dropped off and picked up two antibiotics; and picking up dinner. She still had my 6 year-old. My trooper was still screaming when we were leaving the hospital so the thought was they (Lori, Elijah & her son) would get some dinner while I got Christian into bed.

The bleeding has stopped now by Sunday morning. His breath still smells very raw though. And now that he is decently smiling I can see one of his two front teeth is turned 45 degrees. Bleck. So not only did I torture him with the doctor last night; I guess I’ll be torturing him with the dentist tomorrow.

Thank goodness for good friends. I often wonder how all of this would have turned out if it was just me doing all the running. We would have done it… but it would have waited till this morning. Instead we are relaxing. All of us are sleep deprived, we needed the relaxing morning.

As I crawled into bed last night at 11pm, feeling the effects of my fever all day which I had forgotten about when my child was in distress, I couldn’t help but miss my soldier. I sent him an email last night detailing our day. I know he wants to know what is happening around home but know that he hates not being here in times like this. We are in the final stretch though… So let’s hope this was our final ‘incident’ for this deployment!

Email ThisBlogThis!Share to TwitterShare to FacebookShare to PinterestMilitary Life:children,Leanne

“MyHelpList” from the Office of the Deputy Under Secretary of Defense

Neighborhood Heroes Can Have Help – Stand Up For Heroes

Being a Caregiver for Our Wounded Heroes