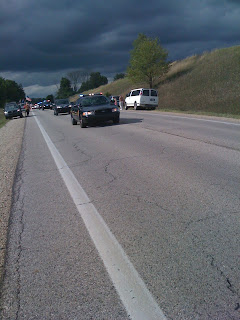 Last Friday I stood sadly along a highway welcoming home a hero who had been killed in action in Afghanistan. He returned through the Grand Rapids airport and then down the highway to his small hometown of Middleville. I did not know Cpl Nick Roush as we settled here after my military retirement and had not been privileged to meet this young man. But I knew of his spirit as he served in Army special forces and I had been privileged to serve with the men and women like him while flying Air Force special ops missions! Eager, gung ho and patriotic to the core!

In a local news story Nick’s father and mother mentioned that they would like to see the highway lined for his return and it was! All 18+ miles! Local citizens, fire trucks, Patriot Guard Riders, police vehicles–all from the area joined together to recognize Nick’s service. Middleville and other nearby towns put out the word and they responded. Families, groups of friends, quiet professionals on their way home from work, VFW, American Legion, church members of Nick’s home church, veterans, etc., they all came out! Flags were carried to hilltops, held high over the highway by a huge fire truck boom and waved by everyone! Quietly people waited in respect. I saw a family praying together with their small kids. They waited more than an hour for the procession to arrive!

Led by the state police, county sheriff vehicles and the motorcycles, Nick then his parents and family came by slowly. A sobering moment! Tears flowed and eyes searched.

Back to the original question: Why did he serve? I can only guess but according to one article Nick’s dad said Nick could have done anything! He was skilled and successful at whatever he chose to do! But he wanted to serve and he did. He made it through very difficult training and was part of an elite team defending his country’s freedom! Individual motivation can be hard to discern but certainly his parents understood the patriotism of our area and Nick must have been raised with that in mind.

Nick leaves his parents and two brothers in mourning for their loss of a son and brother. Our community mourns too and the outpouring of respect showed me that our wonderful country does care. What a blessing! Our prayers, thoughts and support for the Roush’ on Tuesday during the funeral and later too…byColonel KonMonday, August 24, 2009