No luck this year with green beans… at least not since early July when we got our first harvest. Then the bugs, or elements or something came in and wiped them out. Ugh.

Little luck with tomatoes. We have walnut trees, so I know the tomatoes have to fight for survival.

Other rows of plants have flourished… and I love it. Ball jars or Mason jars will never go out of business as long as I am in control of the pressure cooker. That big old pot goes nonstop during this time of the year.

But what to do with peppers. Can’t can them; chopping and freezing work well.. but how many plastic baby food containers does one need in the freezer? Ahhhhh enter the world of pickling. A new one for me! Leanne did it first with cucumbers and spices and mmmmmmm goodness. Dill pickles are great… but not dill peppers… however… nacho ready peppers? There is a winner.

At this household Sunday nights, especially during football season mean a hearty tray of nachos. And my nachos need peppers. I love the crunch and a taste of a zip. Nachos could not be simpler to make! 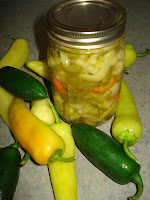 Set the broiler on 500 degrees

On a large cookies sheet, or a broiler pan, spray with the oil. This will make clean up a lot easier.

Spread chips out on the tray to cover. Most likely it will not take the whole bag. Top chips with cheese. Sprinkle pickled peppers over the chips. Slide into oven. Have the tray at least 5 inches from the burner. Watch carefully. Do not allow to burn. Remove as soon as the cheese melts. This might take about 3 minutes depending on the rate of heat of your oven.

Remove from oven with good hot pads, then sprinkle fresh chopped tomatoes over all of this. AND may your favorite team win!

One large pot full of boiling water. Enough water to cover the jars with 2 inches to spare. Bring to a full boil. Put a lid on this and have ready when jars are packed.

In a 1 quart sauce pan bring the vinegar and water to a boil. Put a lid on this, as oh my, it does not smell the best! When boiling add the garlic and allow to sit, with heat turned off for 1 minute. Remove garlic and throw away.

Place in a large pan of boiling water. Large enough to have 2 inches of rolling boiling water to cover the tops of the jars. Boil for 10 minutes. Carefully remove jars. Set on a clean towel to cool. The lids should pop. If not, store in refrigerator for 3 months. That will last just about to the end of football season!byDeborahonMonday, September 14, 2009

Email ThisBlogThis!Share to TwitterShare to FacebookShare to PinterestMilitary Life:Deborah,Peppers,Recipe