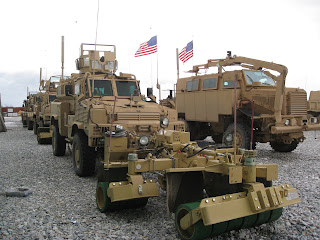 The DoDLive Bloggers Roundtable met with Lt. Col. Tony Adrian and Command Sgt. Maj. Steven Stuenkel of the 203rd Engineer Battalion, the Houn Dawgs, a Missouri Army National Guard unit. The battalion as currently manned in Afghanistan is primarily an Army National Guard unit with active Army and Army Reserve components. The Command Sgt Maj. Said they had had more volunteers than positions for the deployment and the Missouri Guard is manned at 112% of its end strength right now! The unit was deployed to Iraq twice prior to this deployment which started in October.

According to their press release, the Houn Dawgs have a proud history whose mission in Afghanistan is route clearance. As one of the most dangerous and important missions assigned to the United States Military, the Houn Dawgs’ influence can be felt all across the region. Safety for those that travel the roads in Afghanistan is paramount, but is more than a mission for this battalion. “Our resolution is stronger than the enemy’s, our equipment and training better than theirs, and we will not stop the taking the fight to them.”

The unit is responsible for an area the size of West Virginia and has a find/clear ratio for IEDs of about 75% which varies based on location, geography, time and seasonal impacts (winter time travel is more difficult and less IEDs are placed as well). Lt Col Adrian said the key to their success and effectiveness was the platoon leaders who “have great instincts and think on their feet”. They use armored vehicles, optics, ground penetrating radar, electronic jammers and visual detection to identify the IEDs and monitor the Afghan population’s responses which can tell them who might be in the area. They also work closely with intelligence and maneuver forces to “Get Left of the Boom” which is an effort to reduce the number of IEDs before they are placed.

The folks at home are great supporters and the Command Sergeant Major said they were proud to be there and appreciate the support from family, friends, Missourians and all Americans. They really enjoy the mail and care packages they receive from home and the morale is high. I did note the attendance at the Roundtable of a blogger from the Joplin Globe. Roger asked some great questions and provided a local feel while talking to fellow Missourians in Afghanistan! Now that is local care and support!

Thank you to the men and women of the 203rd Houn Dawgs and of course their families who support them while they defeat the terrorists in Afghanistan! Your nation is grateful!

To listen to an audio tape or read a transcript of the Roundtable please go to DoDLive!