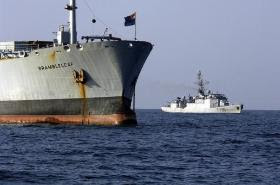 International forces continue many WMD proliferation security initiatives (PSI) with exercises such as LEADING EDGE 2010 held in Abu Dhabi on Jan. 25-28. Thirty nations participated in three different phases of this exercise from a table top portion, a port security piece and a maritime interdiction live exercise.

LEADING EDGE is a USCENTCOM-hosted and USG Interagency (IA)-supported multinational PSI exercise designed to develop WMD interdiction capabilities with partner nations to deter and disrupt illicit transfers of WMD-related material, technology, expertise and equipment, to include addressing the challenges of suspect material inspection, seizure, and disposition. This exercise represents an opportunity for the U.S. and 30 other nations concerned about WMD proliferation to refine WMD interdiction tactics, techniques and procedures and study related challenges (legal, military, financial, etc.) in a cooperative and mutually supportive environment. (from DoD email)

Mike Perron, program manager Office of Intelligence and Operations Coordination for the U.S. Dept of Homeland Security and U.S. Navy Cmdr. Tony Crego, Joint Staff Strategic Plans and Policy directorate (J-5) in the Combating Weapons of Mass Destruction Division met with the DoD Blogger Roundtable to provide an update on the exercise. In addition, US Navy Captain Jack Hanzlik, Director of Public Affairs for Central Command participated as a subject matter expert.

The focus of the exercise was broad international and multi-agency cooperation. In addition to military forces the participants sent law enforcement officials, customs, immigration, legal and others. Participants took a whole government approach with 400 total participants and 80 US participants including 49 DoD, 9 interagency and 22 US Coast Guard. The Coast Guard participation included Visit, Board, Search and Seizure (VBSS) experiences and lessons learned with other national forces. Technology demonstrations with robotics, scanners and Department of Defense canines were included in Leading Edge. Other examples of participants included an Australian frigate, Qatar VBSS team and UAE customs, police and port officials.

Mike said the lessons learned included great participation during the table top part of the exercise including the multinational seminar group was very effective! Primarily maritime focused they would like to see it expanded to include land and air resources with more robust interagency participation. Captain Hanzlik commented that security cooperation exercises stimulate cooperation and positive responses. They frequently open the door for more nations to get involved and create policy changes for more effective cooperation! He said the interagency theme is key with shared intelligence, legal issues and command and control of involved forces making this type of exercise effective while reducing the threat. It also sends a message to the proliferators of WMD!

You can find a transcript or listen to this Roundtable by going to DoDLive! Thank you Lt Cragg for your extraordinary effort to tell the story of our military men and women! Lt Cragg, US Navy, is assigned to the New Media Directorate Office of the Assistant Secretary of Defense for Public Affairs Defense Media Activity.