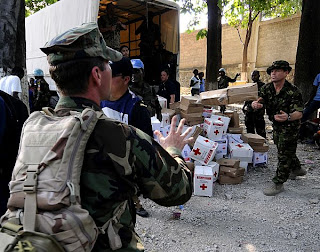 This was an extremely unique opportunity to discuss the efforts in Haiti due to the international staff on board the USS Gunston Hall! Captain Thebaud’s staff included naval officers from Nigeria, Senegal, Italy, Britain and Ghana who were embarked for an Africa Partnership Station (APS) West training event when diverted to Haiti. The ship was originally scheduled to head for Africa to work with West and Central African nations to improve their maritime security and cooperation, but this mission in support of Operation Unified Response changed that and became a lesson all its own. Since arriving off the coast of Haiti they have been working to improve conditions at the Killick Haitian Coast Guard base.

Upon arrival on the 18th, the crew began clearing a soccer field for helicopter operations at Killick. Since then 400 patients have been airlifted by helicopter from the soccer field. Each international officer played a critical role in the effort with their language skills and international affairs experience. The officer from Ghana gathered patient information and became known as their “Haitian brother” as he helped gain their confidence. They have had no crowd or unruly mob scenes at the station during the stressful times due to these types of skills. The Italian officer who also speaks French worked security issues at the gate and interfaced well with the population too. The British commander coordinated with United Nations forces as he was experienced with their operations. The Gunston Hall also had a small civil affairs team on board that worked well with the United Nations and Non Governmental Organizations while providing relief supplies.

The team on the Gunston Hall also coordinated with the Mexican Navy to bring supplies onto Killick from the ARM Huesteco. The Huesteco also provided medical teams for the Killick Coast Guard Station triage area. The US Marine group on board the Gunston Hall had planned to train with West African nations joined with the 22nd Marine Expeditionary Unit increasing their capabilities as well. 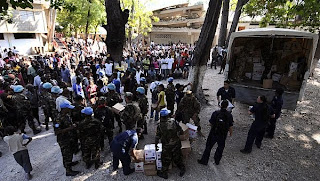 When asked the officers all had a particular touching story to tell about care and survival for the Haitians. The first one involved the premature birth of a baby that was very unresponsive. Timing was perfect for a medical evacuation helicopter that was on the field and within one and half minutes the baby was enroute to the USNS Comfort hospital ship for critical care. Described as a “miracle” the baby survived and is doing well.

This is a fine example of how international cooperation can speed relief and improve the response of the nations involved. The USS Gunston Hall has made us very proud of her international crew! Thank you!

To listen to this very interesting Roundtable with its international flavor please go to DoDLive!

Another PCS? Or Your First? Some great Moving Tools to Assist You!