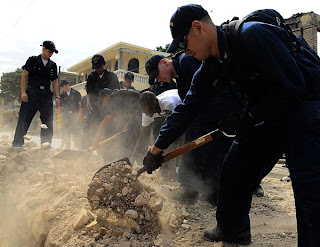 The DoD Blogger Roundtable hosted U.S. Navy Rear Adm. Ted Branch, commander, Carrier Strike Group One aboard USS Carl Vinson off the coast of Port-au-Prince to discuss the overall naval effort to Operation Unified Response-Haiti. Admiral Branch said the effort of the sailors and marines has been outstanding and that they felt that it was “important work” and they did “make a difference in peoples’ lives”. He felt that it was “heartwarming” for those making contact with the Haitians to see their response and appreciation.

The ships engineer groups have been able to assist with infrastructure problems such as generators, wells, pumps, roads, etc to better provide resources and reduce the demand for supply in some cases. The Navy and Marines as of last night had flown 1,979 total sorties and 375 medevac missions with their CV-22s, CH-53, E-2s, C-2s and SH-60s. The Admiral’s Task Force has provided 1,182,300 pounds of relief supplies including 161 tons of food and 345,000 pounds of medical supplies since its arrival. The Marine CV-22s have taken on several missions including aerial reconnaissance, airlift of ground survey teams, medevacs and re-supply missions to Guantanamo Bay and back. Their higher speed and range allow them flexibility in the mission choices. 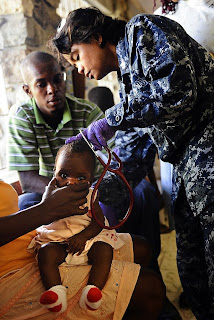 When queried about the length of the mission the admiral said, “the Carl Vinson is here till relieved”. He felt that their lessons learned made each better than the previous one a 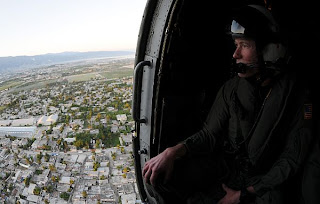 nd that the process on the ground is better. Their coordination with the Non Governmental Organizations, the Haitian government, international partners and JTF Haiti determined the best places for distribution of relief supplies, developed better communications and provided continued improvement of day to day support for the Haitian people. He gave a large list of NGOs they were working with including numerous missions groups. He praised the medical staff of the USNS Comfort which has treated 1,427 patients and completed 93 surgeries with 346 patients currently on board.

This is a great story of international cooperation and the capabilities of military forces to provide relief during natural disasters. Thank you Admiral and the sailors and marines under your command!

To listen to the Roundtable please go to DoDLive!