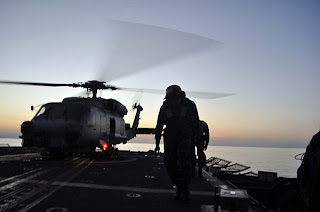 The Department of Defense hosted a Bloggers Roundtable this afternoon to continue the information flow about our efforts to assist the citizens of Haiti! The guests were U.S. Navy Capt. Jeffrey T Griffin, commanding officer of the USS Normandy and U.S. Navy Lt. Cmdr. Michael Hansen, officer-in-charge of HSL 46.

“USS Normandy (CG 60), an aegis cruiser, arrived off the coast of Port-au-Prince, Haiti Jan. 17 to support Operation Unified Response. Immediately upon arrival pilots from Helicopter Antisubmarine Squadron (Light) (HSL) 46, stationed in Mayport, Fla. Began utilizing the two embarked SH-60B helicopters. So far the “Screaming Seagulls” of HSL 46 have transported personnel both for medical treatment and to support operations in addition to transporting food and water ashore. USS Normandy remains a ready platform for helicopter operations as well as providing air surveillance for the heavy air traffic in the area.” (email from DoD).

According to Capt Griffin the Normandy was out of port in less than 15 hours and the third on scene after picking up its helicopter detachment at Mayport NS Florida. The ship’s mission is to provide radar for the incoming aircraft to Port-au-Prince and has been placed 50-60 miles west of the port to be better aligned with the traffic flow. They provide their radar picture to the USS Carl Vinson, airborne E-2s and other resources to provide a safer flying environment for the arriving and departing aircraft. They also provide a platform for the 2 SH-60 helicopters on board for maintenance and crew support.

The SH-60s have flown more than 50 hours since arrival (4 days) which with my experience flying HH-60s in the Air Force is an extremely high fly rate and shows the dedication of the maintainers and flying crews! Nice job! They have delivered 600 cases of water, 800 cases of MREs, moved 100 international passengers and medevaced 17 personnel. Commander Hansen said the medical teams seem very well organized with specific missions for his crews that have been very effective. I asked him for a mission that had to

uched the crews and he said the medevac of an infant from a remote village to a hospital near Port-au-Prince was the one he would remember. An international aid worker escorted the mom and baby onto the aircraft to be flown to a hospital furthering demonstrating the international effort to care for the Haitian people who have seen their lives so dreadfully impacted by the earthquake.

Captain Griffin said that one of the USS Normandy sailors had family in Haiti and first heard of the deaths of an aunt and cousins but still had not heard from his mother, brothers or sisters. He just found out they were safe and obviously is beyond relief! I will try to get more information such as this to show the impact of the earthquake and the life saving efforts of our military, international aid organizations and others involved in the relief effort!

To listen to the Roundtable please go to DoDLive.

“Ride for Our Heroes” in New England – A Wordless Wednesday Thank You!