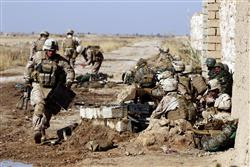 As “Operation Moshtarak” kicked off this week it brought me back to the fourth military budget theme from the Department of Defense discussed in earlier blogs. During the Roundtable with Under Secretary of Defense (Comptroller) and Chief Financial Officer Robert Hale, he highlighted the themes of the military budget as being:

I wrote on the first priority in, The 2011 Military Budget – DoD Roundtable with Secretary Hale and people programs usually gain a lot of support. I wrote on the second and third themes in The Defense Budget Squabble Continues at the Kitchen Table – DoD Roundtable. More controversial than the first theme the second and third themes are very politically challenging as they are based on decisions which affect the purchase of major weapon systems, canceling others , how the money is split between the services, etc. and which congressional district receives more or less in the budget. The fourth theme is probably not as controversial since it directly pays for the efforts of the combat troops and those supporting them. During the roundtable Secretary Hale said this about the 4th theme,

“And our final theme in this budget is supporting our troops in the field, providing all the resources they need, including financial resources. And that brings us to what we call the overseas contingency operations, or OCO, portion of the budget, the wartime portion. And we have added — asked, as I mentioned before, $159 billion as we build up in Iraq and draw down — I’m sorry, we build up in Afghanistan and draw down in Iraq, as well as $33 billion in — for fiscal year ’10 supplemental to pay for the extra troops ordered to Afghanistan.”

I never agreed with this administration’s change from the “War on Terror” to Overseas Contingency Operations because I think it further separates the military community from the American population. The military is at war and the casualty receiving center at Dover AFB proves this almost every day and I believe most Americans are not in touch with this fact! But this is about the budget that supports the Afghanistan buildup, the drawdown in Iraq and supports the President’s decision on Guantanamo detainee operations (which may be particularly difficult to get through Congress due how controversial it is with the American population and specifically the citizens of New York). It supports the infrastructure improvements in Afghanistan needed to win the war there and provides training for the Afghan security forces as well! It will also provide funds for the continued training of Iraqi security forces and the peaceful and I might add successful transition in Iraq. 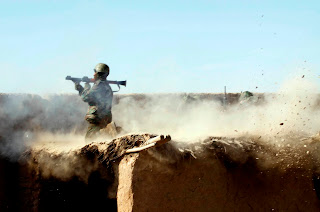 ces with new rotary aircraft, additional units, individual equipment and salaries of police and soldiers. The effectiveness of these national assets in both countries is directly tied to their budgets, training, equipment and morale. To be successful they must be adequately funded.

Some specific American programs funded in the proposed budget in the support of operations such as Moshtarak include:

These programs are force enablers and provide improved combat capability and protection for the troops at war and in combat daily! As we end this series of blogs on the proposed budget and the roundtable with Secretary Hale, I asked that we keep our forces in combat in mind as we discuss this budget during the next 6 months. As congress attempts to add earmarks (funding in their district or non military budget items), pet projects that have no relationship to the military budget and other controversial measures or actions occur, please be aware of the impact on the morale of the troops and the critical support for them and their families during wartime! Lastly, please pray for the troops and their families as they are in the middle of a large effort in many locations ensuring the security of our country and that is what the military budget is supposed to be about!

If you would like to keep up to date on budget issues please continue to follow MilitaryAvenue.com and this list of articles on the military budget for 2011! If you would like to read the transcript of this Roundtable or listen to the audio please go to DoDLive!

Photo Credit: A Marine with Weapons Platoon, Charlie Company, 1st Battalion, 3rd Marine Regiment, sprints down the line of heavy machine guns to deliver a map after a firefight with Taliban insurgents Feb. 9 at the “Fire Points” intersection, a key junction of roads linking the northern area of the insurgent stronghold of Marjeh with the rest of Helmand province. Marines of Charlie Co. conducted a helicopter-borne assault earlier that morning to seize the area. (Official Marine Corps photo by Sgt. Brian A. Tuthill)

Photo Credit: HELMAND PROVINCE, Islamic Republic of Afghanistan – An Afghan National Army soldier fires a rocket-propelled grenade at Taliban insurgents from Marjeh firing on their position Feb. 9 at the “Five Points” intersection. A group of ANA soldiers joined the Marines of Charlie Co. as they conducted a helicopter-borne assault earlier that morning to seize the key intersection of roads linking the northern area of the insurgent stronghold of Marjeh with the rest of Helmand province. (Official Marine Corps photo by Sgt. Brian A. Tuthill)byColonel KonSunday, February 14, 2010