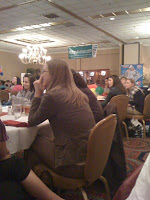 Army Proud. Army of One… not for their spouses! We just closed up shop on another ArmyWiveNetwork.com Priceless Package Field Exercise. Say that twice.
Starlett Henderson and Tara Crooks put on a show! WOW! Young spouses who are away from home for the first time… with hubs away from them learned how to reach out, talk, react, connect, communicate, laugh, encourage and be encourage and they learned from experienced spouses who have been there done that and bought the tee shirt… but know that deployments NO WAY get easier. They were assured that they don’t have to be professionals in handling loneliness, stress or consternation. Army spouses are NORMAL! AH, oh what a feeling!
Laughter ripp 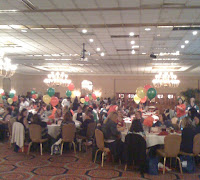 led across a packed Club Stewart ballroom. Those on a waiting list who turned up hoping against hope that there would be no-shows were sorely disappointed. But those who had their registrations were greeted with gifts, door prizes, fantastic advise… but I feel best of all meeting a battle buddy. Making it alone just doesn’t make sense, and Army spouses are sensitive and sensible!
I give them all a loud HOOAH! Thanks for the opportunity to attend and get the word out about MilitaryAvenue.com. This trip from Michigan to Fort Stewart was so well worth it!byDeborahonFriday, March 05, 2010