My interview with LTC Marc Hoffmeister, one of National Geographic’s “Adventurer of the Year” recipients. 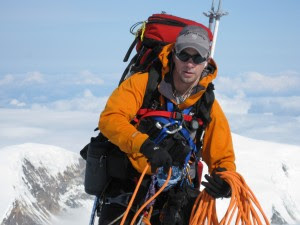 In April 2007, LTC Hoffmeister was severely injured while serving in Iraq when an IED destroyed his Humvee. Hoffmeister was evacuated to Germany and then back to the U.S. on a 29-hour “hell flight” home, where he had eight surgeries on his arm and endured many months of painful rehabilitation.

The military community is full of amazing stories and personnel that have worked and struggled through unbelievable feats. I had the opportunity to interview LTC Marc Hoffmeister. Hoffmeister was recently honored by National Geographic as one of their “Adventurers of the Year”. Marc successfully climbed Mount McKinley (also known as Denali) as part of Operation Denali. Hoffmeister was the organizer and team leader of a group of wounded warriors who set out to climb the 20,320 ft. summit.

All of this started with Hoffmeister’s wife letting him know she was going to climb it with or without him. Military spouses know how to step in and be the strength their soldier needs. Hoffmeister, who was in a slump, decided that he needed to step up and take control of his recovery and get involved. He called Walter Reed and spoke to a rep in the Wounded Warrior Program asking them to become a part of his Denali goal. Hoffmeister wanted soldiers to go along that were aware of being fit and conditioned but not expert climbers. As Hoffmeister said, “I was given a pile of applicants and it was difficult to decide who to choose.” Hoffmeister shared that, “A lot of the guys along had no idea what they were in for. He also mentioned, “I am still in touch with many of the applicants that weren’t chosen.”

I asked, “At any point did you want to quit, if so, what kept you going?” Hoffmeister responded with, “The biggest way I overcame the situation was remembering how fleeting life is.” He reminded himself to, “Suck it up and drive on”, “Always keep it in perspective”, and “Everything is accomplished through small steps”. During the interview Mark would mention many four or five word statements that kept him going. I can tell he is a climber because when you are on that mountain, you don’t have the breath to urge yourself on with long sentences. Here are a few more motivational thoughts he mentioned; “never give up”, “tomorrow the pack will be lighter”, “things are going to change soon”, “When in doubt go up”, and “Don’t let your team down”. As a soldier and leader you have to be able to pick your troops up and give them just a few words to keep going. Hoffmeister has it down.

On 16 June 2009 at 1830 local time, Hoffmeister, his spouse, and a few others including three other Iraq veterans: Jon Kuniholm, an ex-Marine who’d lost an arm to an IED; Matt Nyman, an Army Ranger whose leg had to be amputated after his chopper was shot down; and David Shebib, an Army combat medic who’d suffered severe head and chest injuries after stepping on an IED all reached the summit.

My 5 words to Marc and his spouse, “Thank you for your sacrifice”.