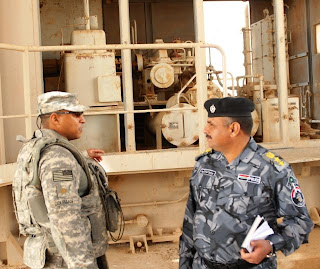 The DoD Bloggers Roundtable met with Brig. Gen. Ralph Baker this morning to discuss today’s Iraq and the continued transition of the U.S. role in Iraq. General Baker closed with the comment that we won’t know how successful we have been until post 2011 (milestone for withdrawal) and we see the new relationship with the Iraq government – 3,5,10 years from now. I agree with the assessment but have confidence that our efforts and sacrifices have been worthwhile and have/will improve the lives of individual Iraqis.

Since June 2009 U.S. forces have left the Iraq cities and now are in an advise and assist role with the Iraqi Security Forces. The general said that this transition has been very successful with the US forces drawdown to reach 50,000 by 1 September from its current levels of 97,000 and the highest level of 170,000 during the “surge”. This drawdown will also reflect the mission change of US forces and our unit composition/skill sets will change too.

Currently, the Army has 11 Brigade Combat Teams (BCT) in Iraq and will transition to 6 Advisory Assistance Brigades (AAB) by 1 September. These new brigades will have new skill sets including 40-50 additional field grade officers to act as advisors to major Iraqi units and additional capability in intel, logistics and civil affairs. Two AABs will be placed in each region of the north, center and south of the country.

General Baker said the Iraqi’s ability to maintain their own security has allowed the U.S. to meet the withdrawal milestones. An example of this success has been the removal of weapons caches and the fact that Iraqi citizens now turn in the location of the caches to the ISF. He did say that they have seen new caches arrive from Syria and Iran but the support of the citizens continues to grow as they report the locations to authorities. 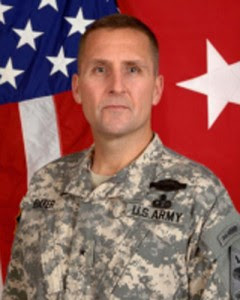 A very interesting note was the impact of efforts to improve Iraq’s agriculture! The Army BCTs, USAID, Non Governmental Organizations (NGOs) and Army Civil Affairs units have cooperated to assist farmers produce multiple crops using greenhouse growing, drip hose irrigation and other techniques. The efforts have been so successful to the Southeast of Baghdad, that they have been expanded to the West and eventually into Anbar province. This effort will definitely improve the lifestyle, economy and improve relations with those involved. I believe the Iraqis want security for their families, a healthy lifestyle and food on the table much like Americans! With the progress seen it appears they (and we) have been very successful! Congratulations to all!

If you would like to hear an audio of the Roundtable or read a transcript please go to DoDLive!