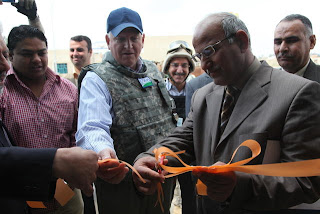 The Way Out of Iraq! What is the next step? We eliminated a dictatorial regime; continue to advise their military and police; assisted in the development of their new constitution; watched the country hold democratic elections, rebuilt much of their infrastructure and are ready to come home! The DoD Bloggers Roundtable met with Maj. Gen. Terry Wolff, United States Division – Center commander who provided a post-election update of the next steps. General Wolff has served in Iraq in 2003, 2006 and now in 2010.

General Wolff commented on U.S. support to the elections, the ongoing advise and assist mission with the Iraqi Security Forces and perspectives on the “responsible drawdown”. The US forces will be down to 50,000 personnel by September 1st! In January the US withdrew a brigade and went from four to three combat brigades. All US forces are to be withdrawn in 2011 which is a great end to this chapter in our history.

The general was very encouraged by the economic growth he has seen, the development and pride of the Iraqi Security Forces following the recent elections and the Shia pilgrimage in February that involved 12 million persons. The Iraqis have been responsible since June 30th last year for their own security with the US and others in an advising role. They have an Army of 200,000 and 600,000 police to ensure security and protect vital resources such as the oil infrastructure, pipelines, terminals etc. Most of the US security advisors are at the staff level now and the Iraqis are doing their own training.

The Iraqi Army logistics at a tactical level are in place and problems are being resolved. Slow arrival of parts can be a challenge and the development of a strategic logistic capability continues. They are building a depot and many of the challenges are being worked. This growth of logistics capability is another step in the relationship that is allowing the US drawdown of forces.

The general ended the discussion with a comment on how proud he was of the US military personnel: Army, Navy, Air Force, Marines and Coast Guard have done an incredible job and met all the challenges! He also mentioned the team of civilians and State Department personnel and how they have aided the efforts of the Iraqis! We as a nation should be as proud and supportive of these heroes! Thanks for your service General Wolff and a big HOOAH from home!

If you would like to listen to audio of the Roundtable or read a transcript please go DoDLive!