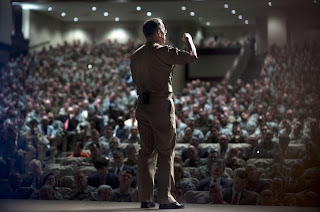 I enjoyed talking to and asking questions of five majors attending the Army Command and General Staff College (CGSC) at Ft Leavenworth concerning the changes to the curriculum at Army basic training this afternoon. I spoke with Majors Dugger, Register, Grubbs, Butler and Favor. I hope I have spelled all your names correctly!

During this DoD Bloggers Roundtable the officers communicated well and had a lively discussion about weapons training and other changes during basic (See US Army Initial Military Training – DoD Roundtable with LTG Mark Hertling for an earlier discussion of changes at basic training). The field grade officers confirmed that the changes mentioned by LTG Hertling were based on Army experiences in Afghanistan and Iraq where they had served. For example, sprints were now included in training in addition to longer endurance physical fitness. Bayonet training and some weapons training were eliminated and the officers experienced in the field supported that change and other amendments to the Warrior Task List as well.

The lessons learned during combat experiences in Afghanistan and Iraq have been successfully applied in Haiti by forces responding to that country’s devastating earthquake with humanitarian assistance. Col Tim McAteer, commander of the 2nd Brigade, 82nd Airborne Division commented during an earlier Roundtable on how dignity and respect led to order in Haiti. I asked if the lessons learned had been applied to the basic training course as well (social interaction with different cultures, community leadership, etc). One major commented that they had such limited time during basic that they had not been included in the latest changes but he did note that they were definitely being applied at unit level training prior to deployment.

While off topic a bit I also queried them on their curriculum at Army CGSC on the use of social media to get out the Army message. When I interviewed LTG Keen, Commander Joint Task Force Haiti last week he spoke highly of the social media and the public affairs officers and subordinate commanders had done a fabulous job of getting the message out via the social media in addition to the normal media outlets. One major said they had a specific course at the school on strategic communications and that included participating in events such as today’s Bloggers Roundtable and writing a blog on the Army message. While not a core part of the course, they all felt comfortable using Facebook and other social media (it appeared during friendly banter that some were more comfortable using the social media tools than others). I think that is a great step to familiarize field grade officers with communications and the news media! They will use those experiences and be better commanders with that in their training background!

If you would like to listen to the Roundtable or read a transcript, please go to DoDLive! Thank you to Ashley and the DoD New Media division for coordinating the Roundtable! A special round of applause for the participants from the Command and General Staff College as well!

Apple Chips for your Next Care Package