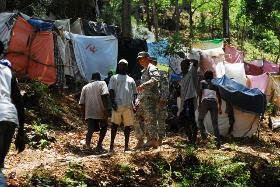 The Joint Task Force Haiti will close on the 1st of June as the original missions to save lives; provide food and water; reduce suffering and mitigate the effects of rainy season weather on displaced Haitians living in camps have been accomplished! I might say, Accomplished Successfully! I have been meeting with the leaders of this superb humanitarian relief effort since the beginning! From a one on one interview with Lt General Keen, the commander of the Joint Task Force when it was created in January, following the disastrous earthquake, to unit commanders, I have had the opportunity to almost feel like I was on the ground in Haiti! Interviews included medical personnel, transportation specialists, reservists, public affairs personnel and many more! They were from all the service branches including Reserve and Guard components! A big thank you to all of you! Marines, Sailors, Airmen, Soldiers and Guardians you have made us proud of our country and how we help others! In this wrap up to the JTF Bloggers Roundtable, Maj General Simeon Trombitas, current Commander of the JTF recapped events and explained what the future held for our military forces in Haiti.

While the JTF closes (actually it leaves an eight person coordination cell from Southern Command) it also acts as a lead in for New Horizons, a National Guard effort from Louisiana, Arizona, Montana, Nevada, Puerto Rico and the Virgin Islands. The Guard will arrive with 500 personnel to continue engineering and medical operations to help the Haitian people! The plan includes rebuilding three destroyed schools and adding a fourth, digging wells and other construction projects. The medical teams will conduct ten medical readiness exercises with those in need of care through the end of September.

I asked General Trombitas how we measured success in Haiti after 22,000 military perso

nnel were deployed at the apex of our effort and he said it can not be measured in numbers! He said the success was measured in the incredible flexibility of our service members who rapidly responded to save lives! It was measured by how the Haitians saw us, as our forces delivered water, food, medevaced the injured, re-opened the airport, rebuilt refuge camps, repaired the damaged seaport and so many things that can not be measure! The country is returning to normality with elections in the future, commerce returning, commercial air traffic returning, seaport operations better than before the earthquake and much more! Congratulations to all involved!

The general was amazed at the resiliency of the Haitians and their appreciation of our efforts and those of the UN, USAID and other countries participating in the relief. He offered a big thank you to the service members’ families who gave up time with loved ones. Many of the service members just returned from deployments or are about to deploy and this response was not included in their schedule! So think of missed birthdays, anniversaries, reunions and holidays back home while serving in Haiti and you can see part of the sacrifices made by our military personnel!

Want to enjoy a history of the efforts? Please go to Our Letters to You on MilitaryAvenue! To listen to the Roundtable or read a transcript please go to DoDLive!byColonel KonWednesday, May 12, 2010