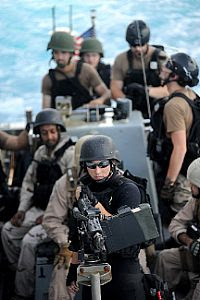 The DoD Roundtable met with U.S. Navy Capt. Mark Montgomery, Navy Strategy Branch Head, and U.S. Navy Capt. John McLain of the Navy Strategy and Policy Division to discuss the just released Naval Operations Concept 2010 which supports the Maritime Strategy published in 2007. It is a must read for naval service personnel from the Navy, Coast Guard and Marines!

According to Capt Montgomery the document allows the naval services to “operate across a range of force structures” and is not tied to funding lines during the Pentagon budget process. It does provide strategic planning in response to the QDR (Quadrennial Defense Review) but when I read it I saw it as a great guide for Navy, Marine and Coast Guard personnel. It demonstrates what the leadership was expecting them to perform in order to protect this great country and other core responsibilities! It is well written and although a bit lengthy it does give a clear picture of naval strategy in different contingencies. It also outlines challenges, concepts and opportunities the sea services face! It is the “ways – not the means” so it is not fiscally or resource constrained and does not provide force structure which other plans will do.

I asked the captains if the recent experiences in Haiti acco 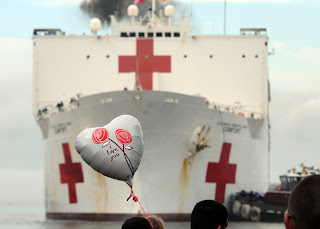 mplishing humanitarian relief/disaster response supported the naval strategy according to the NOC. They agreed that it did and the NOC provides not just reactive but proactive planning for HA – Humanitarian Assistance as one of its core responsibilities. The strategic planning allows for interoperability and crisis response with limited resources avoiding duplication. It also provides the foundation for coordination with other military services, governmental agencies, non governmental agencies and other countries’ responders as seen in Haiti during our national response.

General Conway described the premise of the NOC in the introduction of the document:

The basic premise of our newly published Maritime Strategy is
that the United States is a force for good in the world—that while we
are capable of launching a clenched fist when we must—offering
the hand of friendship is also an essential and prominent tool in
our kit. That premise flows from the belief that preventing wars
means we don’t have to win wars.