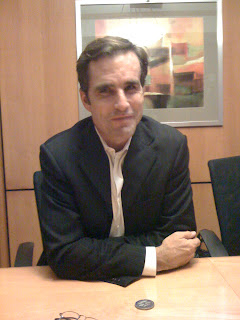 “Everything we can do to help them” “I was surrounded by heroes!” Two quotes from Bob Woodruff during MilitaryAvenue’s interview that showed how he much he cared about the troops!

Deb and I had a wonderful and refreshing opportunity as military bloggers on Wednesday to meet and interview Bob Woodruff, founder of the Stand Up For Heroes program in its fourth year in New York. Bob, an ABC news correspondent, injured by an IED in Iraq on January 29th, 2006 credited the heroes around him on that day for saving his life as he entered “the tunnel” with a severe traumatic brain injury.

After the IED went off, a fire fight ensued and soldiers of the 4th Infantry Division returned fire, risking their own lives to rush him and others injured to a Bradley Fighting Vehicle for evacuation. They moved to a landing zone where a medevac Blackhawk helicopter could pick them up! According to Bob, the Hawk crew ignored ground fire and command direction not to land during the fight to pick him up and start his journey with a traumatic brain injury (TBI).

Bob said it was 37 minutes from the time he was injured till he was in an Air Force hospital with a joint Army/Air Force team of surgeons saving his life! After being treated in the field location he was flown to Ramstein AB, Germany and the Army’s Landstuhl hospital and finally to Bethseda Naval Medical Center for treatment and to begin recovery.

What impressed me during the interview was how each time I asked him a question about him, he turned the question around to the troops and how they were the heroes protecting us! He described how after he entered “the tunnel” with a TBI that his family wanted to do everything they could to help service members and their families with similar injuries. It became a new focus, a new mission and obviously a life changing event. They started “The Bob Woodruff Foundation” which at the time of the interview had raised $8.5 million for injured heroes! Bob, an award-winning television reporter and co-anchor of ABC’s “World News Tonight” when he was injured described the foundation as the “most satisfying work we have ever done”. He and his wife Lee, have also written a book about their experiences after his injury, “In an Instant: A Family’s Journey of Love and Healing” with a portion of proceeds going to the foundation to support his heroes!

I asked Bob what message he wanted us to send to our military audience and he said to let them know, “We are behind you!” He spoke with animation when talking about the troops and said the program that night, Stand Up For Heroes, was all about the warriors! He described his recent trip to Afghanistan with Admiral Mullen and how the IEDs were larger and accounted for 85% of those injured! He said, “how could we not support’ the men and women serving there! In fact, he said they were going to stream Stand Up for Heroes live to 6 overseas locations such as Kabul, Bagram and Kandahar and also to Walter Reed Army Medical Center that evening to let the troops know they were being supported there! 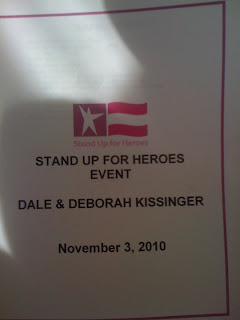 I will write about the evening we spent at Stand Up for Heroes (with Bruce Springsteen, Jerry Seinfeld, Jon Stewart ++) in a separate post but here is a link to the Bob Woodruff Foundation, ReMIND.Org where you can find more information about this incredible man and his family’s efforts to help our American Heroes! Thank you Bob and Lee for caring so much about those who serve all of us so well! You are so authentic and military personnel and this military family are absolutely in awe of your support!

I would also like to thank the Sears Corporation and Euro RSCG Worldwide PR for making this trip possible for us! Kelly and Morgan did a superb job of setting up this opportunity and it allowed us to have a fantastic experience with a true American hero himself, Mr Bob Woodruff!

Veteran’s Day (November 11th) is quickly approaching! Looking for some ideas on how to say a simple thank you to veterans! MilitaryAvenue has some suggestions at 101 Ways to Thank A Veteran!

As a part of attending the Stand Up For Heroes event, Sears Holdings provided my travel, accommodations and a FlipCam to capture on-site footage.
byColonel KonFriday, November 05, 2010