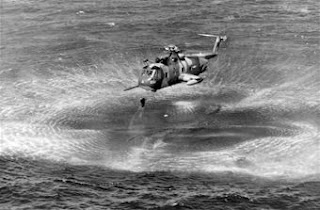 This week has been hectic! We traveled to see family for a Christmas gathering and then headed south to Wright Patterson AFB for a special event on Wednesday recognizing the Airmen who flew the HH-3 Jolly Green Giant! This aircraft flew rescue missions for four decades! The Air Force dedicated an aircraft, tail number 709, at the National Museum of the US Air Force at Wright Patterson AFB but what I saw were the people that cared for the old bird! As I looked around the audience the men and women were absolutely enthralled with the aircraft and as they listened to the guest speakers, I felt a chill realizing many of them knew someone who did not come back from a mission to save a life or pull a downed airman out of harm’s way!

It was a cold day in Dayton but this aircraft was developed to fly rescue in Southeast Asia over the long distances required to reach our fighter/bomber friends ejecting over the hostile areas of Vietnam. In Southeast Asia the crews earned one Medal of Honor, twenty-four Air Force Crosses, and over 190 Silver Stars just during that conflict and many were in attendance at the ceremony! In fact, HH-3E 709 was flown by Maj. James E. McArdle, Jr.,(now Colonel retired) and his crew in 1979 during a peacetime rescue mission off of South Korea and earned the MacKay trophy, awarded for the most meritorious flight of the year by an Air Force person, persons or organization. If you would like to see more history of 709 please go to this National Museum Fact Sheet!

The first inflight refueling capable helicopter, the HH-3 showed its prowess by flying non stop from New York to Paris in 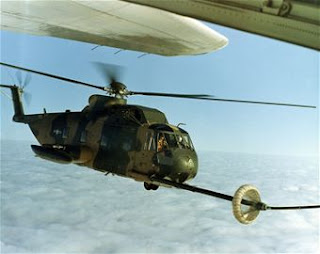 1967! The partially retractable gear and refueling probe and the professional maintainers made this aircraft an endurance challenge for the crews! I flew one mission for almost ten hours and many have flown longer ones and it just kept flying! During the ceremony, Lt General Donald C Wurster, the commander of Air Force Special Operations Command who began his career in HH-3s, spoke of the challenges of being an Air Force helicopter crewmember and how his officer skills were developed and toned by the commanders he had early in his career! Men who showed him the character and strength needed during these difficult missions but also for life! Maj General (Retired) Michael N Farage, represented Sikorsky Corporation, that designed and built this aircraft and spoke of the heritage of this company and its military ties! Still producing rescue aircraft such as the Air Force’s HH-60G serving in combat in Afghanistan right now the crews continue to excel at their mission, “That Others May Live”. I have worked with both men during my career and it was a certainly a wonderful opportunity to meet, enjoy old friendships and update folks on life’s happenings.

I was blessed by flying 11 different aircraft in my career but the HH-3E was my squadron command and that gives it a notch! The 56th Rescue Squadron at Keflavik Naval Air Station, Iceland was where I became a squadron commander of Jolly Green Giant aviators, maintainers, PJs (pararescuemen) and their proud families as well! We stood out as an organization among the others because of our mission and the nations who sent their fishermen into the waters around Iceland knew we were there too! Lives saved during my command tenure included nationals from Britain, Iceland and Norway! During other years the 56th saved the lives of men and women using their HH-3Es from numerous other nations including Russia, Poland, Sweden, France and Germany. We retired the HH-3Es at Keflavik in 1992 and transitioned to the HH-60G. Crews from the 56th earned the MacKay trophy during a complicated weather related rescue after we left.

Rescue missions always were flown as a high risk due to weather (it is never great weather when someone is trapped on a glacier), threats (the bad guys just shot down a fast mover is the reason you might be 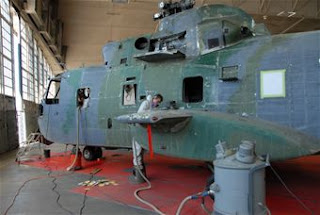 there), a sense of urgency for the injured/survivors and the time of day (most seem to get started as the sun goes down). But one thing the air crews could rely on was their aircraft like 709. The team of maintainers took such pride in their aircraft and at times worked in some of the worst conditions. Replacing engines, rotor blades and other large mechanical parts in austere locations created a challenge that not many Air Force mechanics ever see/saw. The teamwork displayed is often unbelievable. Everyone wants to come back on alert, respond to the crisis or put the aircraft away before the unit Christmas party (which invariably leads to a launch for some poor soul in need of help). I flew for 25 of my 30 years and logged thousands of helicopter hours and the maintainers were the ones who did the dirty work, kept the aircraft safe and allowed us to get the mission done! A big salute to all of you!

Now that 709 is part of the museum be sure to find time to stop in! Wright Patterson AFB is located at the intersection of I-70 and I-75! Military personnel travel those roads frequently and finding the right occasion for a visit would add to a vacation, a break during PCS or a family gathering! We took three of our grandsons for a visit last winter and they loved it! For more information on the museum please go to their website at the National Museum of the United States Air Force. A big thank you to the museum staff that put this program toget 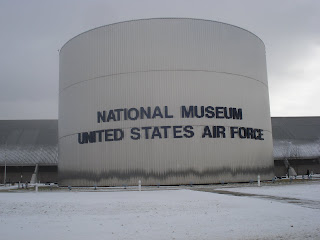 “Off we go into the wild blue yonder… 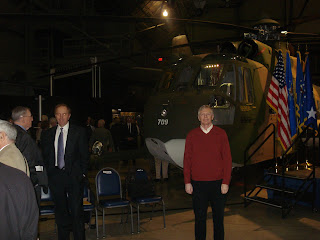 Photo Credits: HH-3E in a hover with PJ on hoist. Courtesy National Museum of the USAF http://www.nationalmuseum.af.mil/factsheets/factsheet.asp?id=17538

Photo Credits: The author in front of 709 at the National Museum of the USAF MilitaryAvenuebyColonel KonThursday, December 16, 2010

Breakfast for Dinner: A Winner