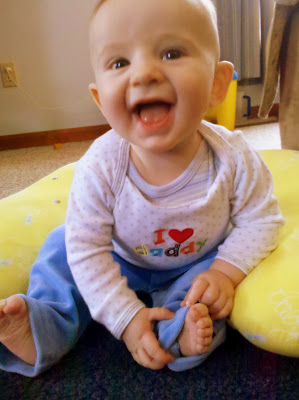 WE did it! By “We” I mean BabyBoy *L* and me! In just a few weeks he will be six-months old and aside from a few sips of formula (promptly spit out on his part) he has been exclusively breastfed.

Can I tell you how much I have enjoyed this journey?! (Thanks, then I will.) I tried with my other two. *E* my first born was a colicky-mess… or maybe it was just me that was a mess? But he would cry for hours and at about six-weeks old consistently had blood in his diaper. I /tried/ to cut out all cow’s milk from my diet at the recommendation of my pediatrician but my discipline is lacking for this cheese lover. (That was the first time I ever had to have a restricted diet and THAT, my friends, is hard to do!) So after a couple weeks we switched to Nutramigen, a special-formula that is worth it’s weight in gold… and costs that much too. So *E* made it a little more than a two-months on the breast.

*C*, my second-born son, was doing beautifully, I thought. Until his two-week checkup. We did the weight check and he had lost weight when he should have gained. He was such an easy infant I had no idea there was a problem… but after working with a lactation consultant it was determined he had a ‘poor suck’. His palate was too high and he was having a hard time getting enough suck to pull in milk. So for three months I pumped milk, put him on the breast, and took a syringe with a tiny tube attached and slowly pushed pumped-milk into his mouth. After three months I was done and he became a formula baby.

So today in my email box I got one of those regular parenting emails and it started:

Congratulations! You have nursed your baby for six months, as recommended
by the American Academy of Pediatrics. You and your baby have enjoyed the many
benefits of a nursing relationship, and can continue to do so.

Wow! I know some moms have done it for multiple children for at least a year if not longer. My hat’s off to you! But for me this journey hasn’t always been easy BUT it was worth it for me. Now, as a polar opposite of his brothers, Baby *L* thinks a bottle is more for playing then drinking… a bottle of water offered when we have cereal usually equates to water running down his chin and big grins. *We* still aren’t sleeping through the night. I haven’t been separated for more than three-hours for nearly six months! Oh and I saw recently he was 17th-percentile for weight. (Although my boys are not big boys. Hubs AND I are 5ft 6… not overly tall nor overweight.) But even with all that I wouldn’t change this journey for a moment and am so glad that my last-born has given me this gift!

If you are starting this journey down motherhood and breastfeeding I would recommend ‘The Breastfeeding Journal’. I got the recommendation for it in one of my emails from Tricare’s eCareConnect. Also be sure to check out MilitaryAvenue.com Resources: Are you having a baby? Lots of great resources there, including Tricare info, mental health info, and much more.

In a lot of ways it’s the little encouragement from the outside world that has kept us going. The little emails that say “Congrats, you have made it this far.” Social Norms that have changed and made me feel only a /little funny/ about nursing in public with a blanket over my shoulder. But even more so is looking down at my nearly six-month old, watching his chubby fingers pinch at my clothes, feeling his weight across my arms, and the smile that goes from ear to ear when he is done. THAT makes this journey worth it!

Email ThisBlogThis!Share to TwitterShare to FacebookShare to PinterestMilitary Life:Baby,Leanne,motherhood