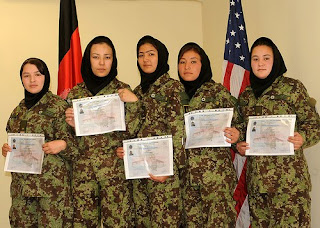 Imagine female pilots in the Afghan military! How about an Afghan Army Officer Commissioning Class of 29 women! Or 35% of the population of students attending college at Kabul University! As we spoke with Dr Jack Kem, Deputy to the Commander, NATO Training Mission – Afghanistan this morning you could hear the excitement of his explanations of where the issues of “gender main streaming” were headed.

Speaking primarily of military and police issues he was cautious about the progress but highlighted the successes and what they meant for the Afghan society as a whole. The

Afghan constitution gives equal rights but a society impacted by illiteracy and fears is accepting women in areas such as border police, logistics and education. With about 1,000 female Afghan National Police Women currently serving, the country has a goal of 5,000 by 2014. They have great acceptance at the border points, airports and other locations with contact with the female population that is difficult for men. Surveys by the UN and others shows support for schools for girls and work for women outside the home (except in areas where the Taliban have a strong influence such as southern provinces).

The military is providing literacy training to female inductees and ensuring they have the same opportunities as males. With a national average of 14% literacy (the women are even lower) learning to read is critical for future success. In his 15 months in Afghanistan, Dr Kem said he has seen a lot of progress. He spoke of police training classes with a curriculum that includes crimes against women such as rape and other topics of interest that impact their lives. He admitted his surprise by the classes’ discussions and questions and their sensitivity (both male and female) to dealing with these rule of law issues. Great progress in a culture impacted by Taliban rule for many years that directly impacted the lives of women through lack of legal protection, opportunities and education. Here is a video on these classes!

The younger women soldiers can see a female general officer and full colonel in the armed services as helping to break through the doors of opportunity and progression. Recognizing the need to mentor women in the field NATO has placed Female Engagement Teams at unit level to help provide advice to female soldiers and help meet the challenges they face in a mostly male organization. Teams are led by a NATO female captain and reach out to assist the progression of women soldiers. The doctor spoke of plans to train the four female pilots in the next pilot training class so they can be turned around to be instructors for future women pilots. With the numbers of trained and literate soldiers and police growing the society is making up for the loss of literacy seen in the generation that grew up under Taliban rule.

Dr Kem said that, “peace and prosperity will be enhanced by the growth of women.” As the country develops the full resource of each citizen and sees the growth of literacy skills; its production, new comforts, desire for peace and happiness will be the next step! If you would like to read a transcript or listen to an audio of this interesting discussion please go to DoDLive. For other blogs on MilitaryAvenue on the Afghanistan War please go to Our Letters to You/Afghanistan!