Why are some businesses successful at reaching out to the military community? 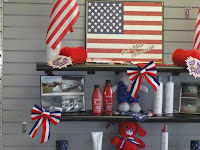 Fantastic Sams shows their colors!We just attended a special event for military spouses at Ft Knox, called a Field Exercise that was a wonderful time! It brought together 300 Army spouses (most had seen their soldier deploy multiple times – some up to six times) and provided them an opportunity to learn coping skills and laugh together about military life and its challenges!

Hosted by Tara Crooks and Star Henderson of Army Wife Network, the Field Exercise also gave away some wonderful gifts!

Super Military SupportersMilitaryAvenue.com was there as a sponsor and coordinated with three local businesses to provide gifts! All three outdid themselves and now have an audience at Ft Knox!  These folks did more than what we asked for and should be recognized for their efforts!! They provided pizza gift cards, coupons, spa packages and salon gift cards and coupons as well! When we approached them we had simply ask for a door prize from each. They responded with what else can we do? When we described the program they reacted with coupons and business menus for each of the attendees in addition to their wonderful door prizes! Their total giveaways to attendees were more than $4,000!

Smart folks at all three companies! Military folks are very loyal and spread the word about companies that support them! A big thank you to Alpha Salon and Spa, Papa Murphy’s Pizza in Radcliff KY and Fantastic Sams in Radcliff as well! If you are near Ft Knox, you need to stop in and support them! 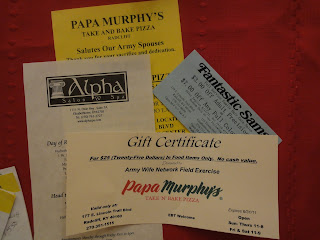 Do you know a company that has a military discount? It does not have to be huge! Just a small token of appreciation will do!  Tell them to Build an ad on MilitaryAvenue.com  to share with us about their company and how it supports the military community! Read why our followers like to follow MilitaryAvenue!

Active Living in the US Navy Even Has an IPhone App! DoD Blogger Roundtable

Caring for Your Parents from a Long Distance – Military Style