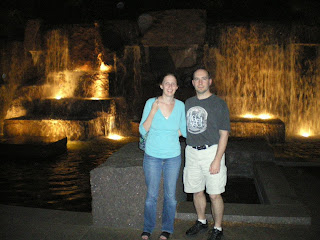 Hubs and I celebrated 10 years of marriage this past week.  Ten years!  That seems huge to me, in this age of short term relationships, marriages falling apart, rampant-divorce.  I can’t wait till we hit our 20 year anniversary and then our 30th, 40th, 50th but for now I can’t help but look back at the past ten and smile. 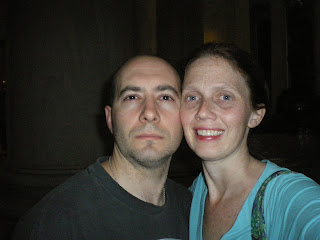 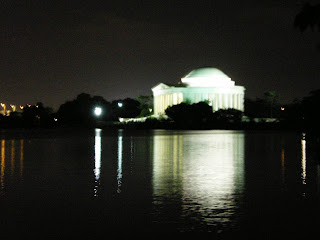 We have decided to take a few days away for ourselves in the next month since we were in DC combining a family vacation and the Military Bloggers Conference on our actual anniversary.  But Thursday night my parents babysat three of our boys and just Hubs and I headed to the Jefferson Memorial.  Time away.  I didn’t really want to go out to dinner.  That is something we can do any day. (and quite honestly I was exhausted!)  Walking for a bit around DC though sounded like an excellent way to spend the evening!

The Jefferson was hoping with school tour groups (at nine at night!).  So after an initial viewing we decided to keep walking.  We found our way to the FDR Memorial.  It was beautiful!  Peaceful.  Quiet.  It is forever ingrained in my memory as a wonderful place to spend with the one I love.  We walked along the Potomac and circled back to the Jefferson and finally our car.  My feet were mad I was wearing sandals; I was tired; but it was the best night of our entire trip to DC.  Time with the love of my life is truly priceless!

– Leanne from MilitaryAvenue.com
PS – I had major camera envy after meeting some bloggers this weekend with their /very cool/ cameras.  Hope you don’t mind my little point and click pictures, but I sure would LOVE a nice camera someday.  Maybe I’ll ask for one for my 20th anniversary ;)byUnknownonMonday, May 02, 2011

Email ThisBlogThis!Share to TwitterShare to FacebookShare to PinterestMilitary Life:Anniversary,family,Leanne,Love,Washington DC