Wow! What a fantastic weekend. We had dinner with neighbors, a barbecue with friends, went to another party with more neighbors and then Memorial Day we marched in a parade, visited a few cemeteries and then had lunch at the VFW. No, the garden didn’t get ’tilled as planned after the major thunderstorm on Saturday night; yes, the air-condition did get turned on Monday night after reaching 90 degrees that day; and yes, the Kocsis Crew needs to officially restock the band-aid box after my 6 year old fell multiple times on his knees. But all in all it was a weekend to be remembered. 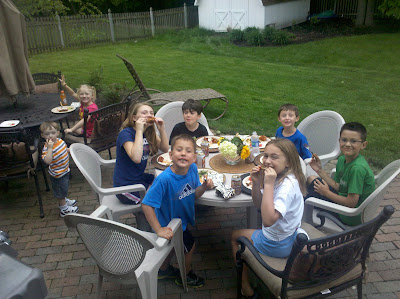 Neighbors! We are so blessed to have neighbors that we also call friends. Saturday night the kids ate dinner in the backyard while the adults sat inside eating, drinking and just enjoying being friends. These families are my support. When things get a little harried in the confines of my own home I can usually just step outside to find another Mom to say, “Can you help?” “Would you listen?” or just someone to sit with and enjoy each other’s presence. 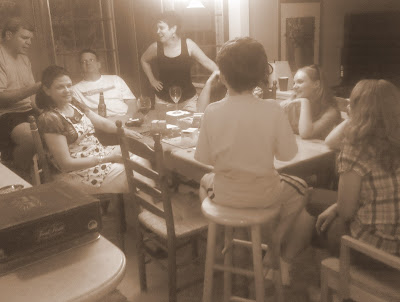 I have two local support networks – the first is neighbors… the second is my Small Group from church. A diverse group, but a group that holds my children up in prayer, who genuinely cares about my marriage, a group that we can laugh with, cry with and just be each other with. We headed to one of the couple’s house on Sunday afternoon. A *roaring* thunderstorm sent us all inside when dinner was done and out came a fun board game! Flexibility is the name of the game and it made Sunday evening a whole lot of fun. 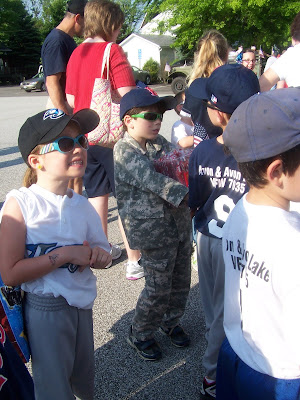 Memorial Day: This was the highlight of our busy weekend. Our small-town parade. The boys , 8 and 6, marched with their Little League teams, both sponsored by our VFW. *E* wanted to wear his ACU’s and I felt it was appropriate enough. The kids tossed candy to the parade watchers. Baby Boy *L* and I walked along side the team to keep the group coherent. It was a whole lot of fun! ﻿ 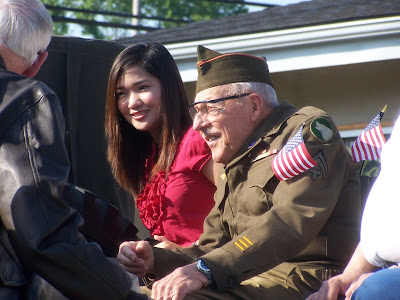 Memorial Day: What spirit this Veteran has. He tossed candy to the kids while sitting in an old style Army-Jeep during the Memorial Day Parade. He even stood up from time to time to wave! I hope when I am his age that I am as gung-ho as he was on this Memorial Day.﻿ 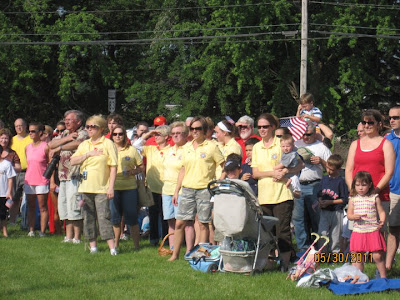 Memorial Day: The parade ended at one of three cemeteries in the city. Parade marchers and parade watchers all convened on a plot of grass at a busy-intersection. We listened to the Star Spangled Banner by the high school marching band, said the pledge of allegiance led by the Boy & Girl Scouts and then watched as the VFW officially remembered those that gave the ultimate sacrifice during times of war. It was great to see the community come together and really think through what the day was about. (BTW, that’s me with the baby on my hip.) 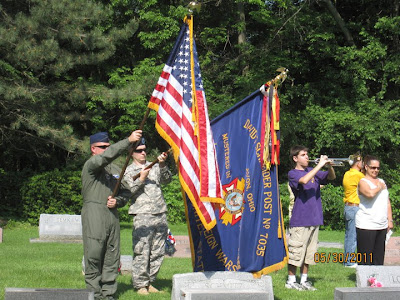 My husband carried the flag at the front of the parade and then held it throughout not only the one ceremony but twice more at shorter ceremonies at other cemeteries. As I brought my boys to the different ceremonies they kind of dragged their feet, groaned a bit and asked “But, Mom, WHY?!” Why? Because these folks that we are remembering today gave their life. “I’m proud to be an American, where at least I know I’m free. And I won’t forget the men who died, who gave that right to me.” – Lee Greenwood It was a great learning experience for the boys and although they still weren’t thrilled to have to attend multiple ceremonies, they got it and the groaning stopped. And that’s all I can ask of them! 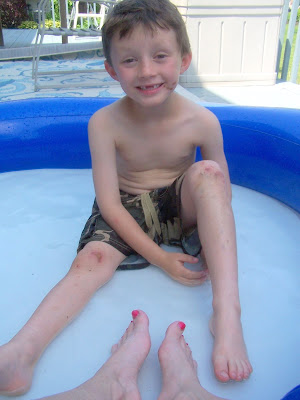 Some folks work on their summer-tan; *C* works on his summer-knees. It felt great to cool off on the deck on Monday afternoon in the baby’s wading pool. It was 90 degrees+ and a great moment for me and the boys to talk about all we had done this weekend. [while letting those knees ‘air out’ a bit :)] I hope you had a wonderful weekend! We ushered summer in with a bang but the honest highlight was the opportunity to talk about what Memorial Day is and then to be able to enjoy all that it stood for.
﻿- Leanne from MilitaryAvenue.combyUnknownonTuesday, May 31, 2011