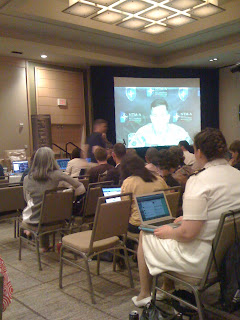 During the Military Bloggers Conference in Alexandria, VA this weekend, the DoDLive Bloggers Roundtable folks arranged for Lt Gen William Caldwell to speak to us live via telecom from Afghanistan. First, thank you General Caldwell for staying up that late to make the schedule for the Roundtable work! The exchange was lively and informative and well moderated by Lt Col Andrew Morton of the US Army Reserve . Lt Col Morton is Director of Army Reserve social media efforts!

The audience was engaged with multiple questions for the general but he gave us some details to start with as a basis for questions! Caldwell is the Commander of NATO Training Mission – Afghanistan (NTMA) which has been in operation for 18 months and started as an effort with two nations and 30 trainers. It now has 32 nations involved with 1,300 trainers! Quite a growth in 18 months under his leadership! By the end of October this year the Afghan National Security Forces (ANSF) which consists of military and police forces will have met its goal of 305,600 personnel!

He said they were recruiting 6,000 personnel per month and 10% were turned away for various reasons. They are now using an eight step vetting process to prevent infiltration by enemy forces including Afghan intelligence screening, drug testing, fingerprint database, eye scans and physicals. They have also begun a program of counter intelligence officers with 200 currently on board with a goal of 440 by the end of the year.

Why is this so critical? We have had repeated cases of infiltrators shooting NATO forces when they were in the uniforms of the ANSF! Just last week an Afghan Air Force colonel shot and killed eight US Air Force Airmen and a civilian contractor (retired Army Aviator) who were part of Gen Caldwell’s NTMA. They were there to train and help develop the Afghan forces and this spurious attack reminds me of 9/11!

There is an ongoing investigation but some details have been released including the fact that the attacker was severely wounded in the exchange and died in the building. The attack has been condemned by President Karzi and two different memorial services were held in Afghanistan involving thousands of participants. The impact on relations between allies has been emphasized to the Afghans and now as we bury our heroes (all with families including some with children) I shed tears for them and think of the huge hole in their family’s lives! Why? Why? Must be asked of our leaders! One of the other panels at the Military Blogger Conference was the Gold Star Families and now we have new members of this heroic group!

Of course, since General Caldwell’s briefing we have killed Osama bin Laden but the War on Terror will continue! MilitaryAvenue has written numerous blogs on Afghanistan during other Roundtables. We want our troops home when the mission is accomplished! The Afghans are forecast to takeover the lead in their own defense by December 2014! We are spending $6B a year on their forces and $110B for ours per year and it is time for this to end.

If you want to see more about DoD Blogger Roundtables go to DoDLive!