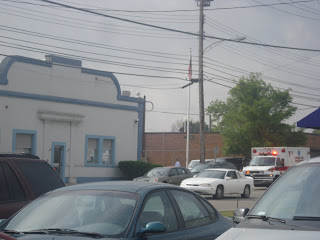 VoA Homeless Shelter in LansingWe drove down the street looking for the Volunteers of America (VoA) Michigan homeless shelter in Lansing. The GPS was right on the money but as I looked in the rear view mirror to change lanes and find a parking spot I had to change plans. Realizing I had an escort as the police officer pulled in behind me, my first thought was uh oh, what did I do? Then I saw the ambulance in front of the building we were looking for …

Four hundred ambulance runs a year according to Dennis Neuner of VoA’s communications department. Deb and I had been on the road at the University of Michigan Cancer Center in Ann Arbor and decided this was a great chance to visit the facility and Dennis was so accommodating and helpful. We were able to visit the shelter and talk to the men and women who cared about our vets, fed them 115,000 meals last year, gave them counseling and helped find them housing and jobs! The place was abuzz with activity; laundry, food preparation, group sessions, chapel time, staff meetings and more! Patrick Patterson, the Vice President of Operations, led the tour and the discussions about the veterans’ needs and proudly spoke of their accomplishments. With an 80% success rate, which includes finding a job and a place to live, the VoA Michigan staff was doing a fantastic job.

Heather, in charge of employment programs said they had 27 job placements in the last quarter. Quite an accomplishment in Michigan with its shrinking economy and work force! VoA has an employment staff of seven and Heather (an Air Force veteran) walked us through their challenges and ways they help with counseling, writing resumes, clothing for interviews, etc. The program was expanding with each success and adding staff as well. 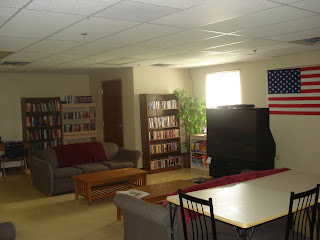 Day Room at VoA Homeless Shelter in LansingWith a grant and per diem program (65% grant and 35% gift) to support the homeless veterans for a maximum of two years, the VoA facility was able to house 56 vet beds with a two step program, the Veterans in Progress and the Veterans Housing Program. The VIP is a 16 bed ward room and the VHP is 20 double occupancy rooms on the second floor. We toured one room and it reminded me of a very clean college dorm room with personal effects highlighting the room. The current stay average is nine months as the staff helps a homeless population that includes approximately 55% with addictions of some sort. But Patrick said the biggest problem is mental and physical disabilities that the veterans are dealing with and most will remain below the poverty level.

Volunteers at the facility provide faith based nourishment as well. With a “big tent” attitude, Patrick said the spiritual help is important but includes only those that wish to participate. Mentorship is also important with many veterans returning to share time and conversation at the center after successfully transitioning. When we visited the kitchen to talk to “Jack” the chef we were impressed with the cleanliness and food. Jack is a retired Army chef with an iron rule in the kitchen and he has been in the food service business for 42 years! With 6 years in the National Guard and 21 years active duty he has the experience to lead a team of staff, volunteers and community service folks prepare healthy meals for the veterans and other homeless personnel looking for sustenance. Each Wednesday, a group of individuals from the Michigan National Guard volunteer to serve lunch as a way to say thank you to the veterans living in the facility and walking the streets.

As we sat down to wind up the visit, Patrick told me the staff was “ferocious about getting the job done” and I had to agree with that assessment. With new VoA Michigan facilities being built in Detroit and upgrades at other facilities, I saw an organization taking on the challenge of the homeless veteran population which is estimated at 115,000 (down from 186,00 at its highest according to VA information).

As we left the modest but clean and well kept facility, we observed that the ambulance had left. Patrick had mentioned that they hope to add a medical clinic this year to serve their population and reduce the number of ambulance runs. The clinic will be built with a $386,000 grant and will certainly improve the capabilities of the VoA staff to support our veteran population on the streets or transitioning! If you are interested in supporting the VoA please go to their website for information on how to volunteer or give a gift.

To see the beginning of this series of blogs on homeless veterans and those seeking to help them such as the Home Depot Foundation please go to “It Was A Wet, Cold Day and the Homeless Veterans Came to the Stand Down!”

Also, look for a Wordless Wednesday blog this week with additional pictures from our visit!byColonel KonMonday, June 27, 2011

Pets for Patriots > A “How To” for Veterans