My dad and father in law are both World War II veterans and are in their late 80s as are most veterans of that war. We share with them and have known their stories but what of those who were killed during the war? Their heritage was left on the beaches of Normandy, at Bastogne, Iowa Jima, over Ploesti, at Midway and other famous WW II battles sites. How do we keep their stories alive? Our children, grandchildren have interacted with those who lived and returned to become our leaders, teachers, steel workers, miners, industry giants and even movie actors. But what of those who died defending our freedoms? I recently became aware of a fantastic program to educate our students about the men who lost their lives on the beaches of Normandy and surrounding areas and are buried at the American Cemetery in France.

The program, “Normandy: Sacrifice for Freedom” is part of National History Day, “… a highly regarded academic program for elementary and secondary school students.” I started reading about both National History Day and the “The Albert H. Small Student/Teacher Institute” and their selection of 15 teachers and students to conduct research about the men who died during combat around Normandy.  Each student had to select a GI from their home state to research and write a tribute of their lives leading up to their death at Normandy. A competitive entry program coordinated by the institute; the teachers and students then are immersed in the history of World War II and their soldiers. 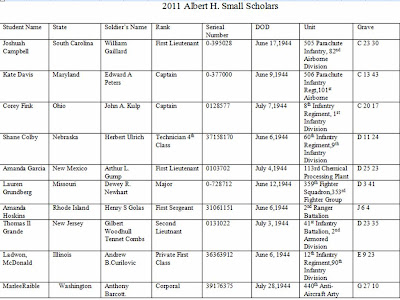 Summer Institute Students and the Normandy Soldiers they are studying This year’s summer institute kicks off with dinner on June 18th at the Ft McNair Officer’s Club in Washington DC and includes tours of historical monuments of that era, museums, current movies with subjects such as, “Saving Private Ryan”, discussions/lectures by historical experts from George Washington University and West Point, the US Military Academy. These high school students are going to know more about WW II than most of us and then they step onto a plane to head to France to see the sites themselves. Walking the beaches, listening to the stories, seeing the gun emplacements, visiting the cemeteries, seeing the gravestones of their soldiers will be a life imprinting event!
﻿﻿
﻿﻿
These students and their teachers will have spent ten days totally involved with our history, will take it home to share with others and have taken a large step to continued academic success! They should have a very different perspective of our nation’s freedoms and what our service members have done and are doing to protect those freedoms.  To find out how the teachers and students were selected and the application process please go to NHD and the Summer Institute.

A big shout out to National History Day for conducting this program and of course, to our WW II veterans! A simple thank you might be enough for most of them but if you know a survivor of this war; give them a call and say it again!

I am also very excited to interview some of the students before they begin this odyssey back in time to Normandy and the American Cemetery.  Hearing their perspective on these men and their sacrifice for our country after a year of study should be very interesting.  At least one of the students is a military brat.  Son of a Marine father and grandfather!  So standby for some more interesting blogs about our military heritage and how it is interacting with today’s students.

Thank you to Fred Wellman who provided much of the information I used to write this blog! Fred is an Army veteran living in the DC area and president of ScoutComms, a unique public relations agency specializing in defense programs!  The MilitaryAvenue team met Fred during the Military Bloggers Conference in April and he has provided us with some great assistance!byColonel KonTuesday, June 14, 2011