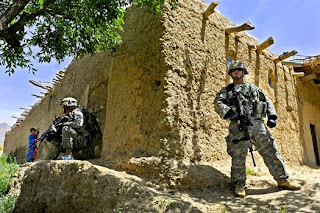 Deh Afghanan village, Afghanistan, May 27, 2011This is a time of transition in Afghanistan. The winter is over and summer has arrived with a vengeance. But more importantly, the transition from a NATO/US led force to an Afghan led military is in full swing! In the year 2014 the plan is to turn the lead over to the Afghan National Security Forces for defense of their own country! A big step but one that requires infrastructure, support forces, training institutions, logistics, plus …! We can create the best fighting infantry and lose the war in 2014 if we do not leave the Afghans with educators, qualified mechanics, supply experts, civil engineers, trained police officers and more …!

The DoD Roundtable met with Colonel Howard Arey, Chief of Staff and Deputy Commander for Regional Support with NATO Training Mission Afghanistan. The colonel gave us a brief overview of the organization that has six commands led by five US Army colonels and one US Air Force colonel then led us into the importance of their mission! They integrate 60 training sites with up to 30,000 personnel in class a month and they build infrastructure such as police stations with engineer forces. They also sustain the engineers and trainers by providing security and enabling long term, self help programs for the Afghans.

These programs as expected will increase in scope for the future and the regional commands will provide the structure to hand over the lead in 2014! As a great flight leader trains a wingman the regional commands train the Afghans to take care of their military and police needs by 2014! There will be a handoff of responsibility and how we train Afghan forces will determine our and their success beyond 2014!

Col. Howard Arey Each regional commander has different challenges and complications according to the colonel. Divided into the Capital region, North, West, Southwest, East and South the regional commands have unique combat forces, climate, topography and many other factors including the cultural issues. He said logistics is the biggest challenge (remember the title of this blog – It takes more than an infantry force to win in Afghanistan!) for security forces. 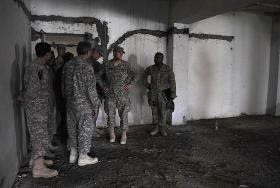 Future Police Training Center in Qalat, Zabul province, Afghanistan When queried about the development of police forces in the regions he said, there are many police specific issues that are complex and different and the Afghan Army is ahead with sustainment and training. With outlying posts in remote areas the police forces are challenged by the logistics of delivering critical need items and basics as well. The Afghan National Police now have an eight week course for basic trainees versus a six week course which allows them to build quality into the program in addition to the quantity they so desperately needed earlier! The development of human rights training, treatment of females, ethics ++ is now included in the course material.

He closed with an interesting comment about reaching out to the Afghan people. The regional commands are now reaching out to the Afghan people through Afghan media! Telling our story and why we are there to help is now on the airwaves through the locals! That would appear to be a huge step in the right direction of winning the hearts and minds of Afghans to ensure a smooth hand-off in 2014!