Staff Sergeant Eddie PeoplesHow do I start? This story is about one of our own, a hero for wearing his country’s uniform, a “Defender” in his one words and certainly a model for caring! United States Army Staff Sergeant Eddie Peoples came home on leave from Vicenza, Italy with his family to care for and see his ill father who had had a stroke. Stopping in the branch of the Sarasota, Florida Bank of America, he saw a robbery “go down” and elected to get involved! More defending to do and children to protect (two of his own were with him), he described himself as on call 24 hours a day.

Waiting for the robber (I hate the “suspected robber term in this case”) to leave the bank he followed him to the getaway vehicle and then blocked it with his own (it was a rental after all). When the robber finally realized he could not leave with his vehicle, he jumped out and confronted Peoples with his “gun” which looked real but when the soldier took it from him using combat skills taught to him by the Army instructors, it was a fake. Subduing the bigger man (hard to believe seeing some of the pictures of the Staff Sergeant) and placing him on the ground on, “a pile of money”, he waited a very short time for the police to respond. Not knowing which guy was the bad guy, the police used their standard protocol which Peoples said he followed very closely until the police had the whole picture. What happened next? Peoples said, “They Helped Me Up” and one gave me a hug afterwards.

He estimates the robbery suspect as being 6 foot 3 inches tall and weighing 260 pounds! I am sure the police were very happy this suspect was on the ground (“cowered” on the ground is how Peoples described it) without his potential weapon when they arrived. Remember our soldier did not know the weapon was a fake when he saw and dealt with it. I ask him if he felt like he had a “combat flashback” and he said, not much but a slight tremor and bit of an adrenalin rush and letdown. He said combat experiences were much worse and described his response there as well. When asked about his wife’s response he described it as very subdued and then kind of a jovial celebration.

Realizing that Staff Sergeant Peoples would be heading back to Italy soon, the Sarasota county sheriff’s office coordinated for a recognition ceremony the very next morning. Peoples received a commendation medal from them for interceding and was part of their press conference. Now he is waiting to hear about coverage of his rental insurance deductible. With a wry sense of humor he said that Bank of America (which needs some good publicity within the military community) waived his $10 fee for the transaction that day! How about picking up any costs from the incident too? Or Enterprise could close the incident and write it off too! He said he would prefer that his expenses to bring his family home to see his dad did not go up due to the incident.

We salute you, Staff Sergeant Eddie Peoples for not staying out of the fight when it would have been easy to do!! We wish your father well too!  God speed and safe travels back to your home. 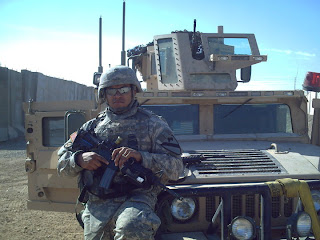 Staff Sergeant Eddie PeoplesIf you would like to listen to an audio of Staff Sergeant Peoples’ interview or read more about him please go http://www.dodlive.mil/index.php/2011/06/u-s-army-bloggers-roundtable-staff-sgt-eddie-peoples/.  To read more of Col K’s blogs please go to MilitaryAvenue’s Col K.

5 Practical Ways to Save Money on Groceries