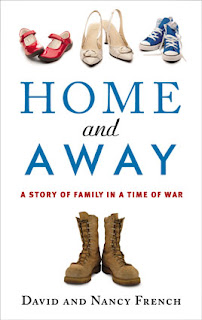 I laughed and I cried (mostly laughed)! What a great book for military couples, their families and even their civilian friends! “Home and Away, A Story of Family in a Time of War” by David and Nancy French brought back memories and new images of warfare and families! This book will help military families see themselves during the two wars that our country is fighting! Or maybe, not the whole country as David felt as he read about a soldier with a family, wounded in war? “Why not me?” asked David. As a 37 year old, comfortable and living well as a lawyer, he was convinced of a gap between American civilians and our warriors and their families. Convicted of the need to serve, he began an odyssey to join the fray.

“Greater love hath no man than this, that a man lay down his life for his friends.” John 15:13

Putting “Home and Away” down as they tell their story, Nancy from home with two children, David at work with the 2d Squadron, 3d Armored Calvary Regiment was impossible. The story of a family, chapter by chapter of their deployment; normal life in Nancy’s chapters in Tennessee but without David and CPT French’s surreal life as a JAG beyond the wire with the troops. I fought back tears reading of our soldiers’ deaths; of children exposed to unthinking adults’ comments; but then of pride with how their church responded to one of their own on the field of battle; how the soldiers’ cared for the children of Iraq; followed the Rules of Engagement and honored their own service!

Then I interviewed and talked to David and Nancy and realized we were connected. They supported our armed forces like many do not. With their actions and decisions to sacrifice with career changes (David is a Harvard trained lawyer), impacts on Nancy’s writing career, relocation and of course family separation during a deployment, they were part of “us”, the brotherhood of the military community that many do not understand. I asked them what they did right, what did their church do right and how did the children handle the deployment?

Author Nancy French“Resilient” is how they described their children but when Dad and Mom decided to tell them about the deployment on the way to a Toys R Us they realized it was a big mistake! Hoping to make it a good event they miscalculated and turned Toys R Us into a bad memory (might not be a bad thing now though). They praised their church’s physical support in addition to spiritual! Many thanks for help with repairs, meals, care packages, even help with pulling a tooth (and that one brought a smile) showed a church that was involved.

They tell their story with open arms and an easy to read style so it can be a great book for a book club, friends to share and hand around for those currently deployed or facing deployment. It would be a great book for your civilian friends to better understand how military families cope with deployment and the stresses, what helps, what not to do and more!

We found the “Home and Away” in paperback on AAFES/Books A Million website and here is a list of other locations to find it as well:
http://www.hachettebookgroup.com/books_9781931722902_WhereToBuy.htm 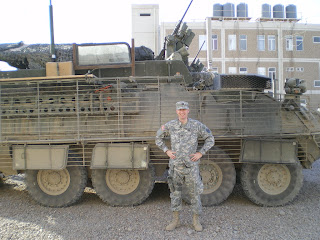 To read other book reviews please go to MilitaryAvenue’s “Our Letters to You”!byColonel KonTuesday, July 12, 2011

Refreshing View from the Top of the Army Reserve – Blogger Roundtable

A Heavy Dose of Perspective