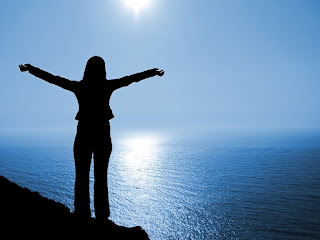 As the young and vibrant woman of God led us into a time of worship this morning she asked, “Who is God to you?”  He can be so many things at so many times but what resonated in my head was “He’s my Rock.”  Because as beautiful as a sandy beach is, I can’t ground myself on thousands of pieces of shifty sand, thousands of things pulling and pushing me this way and that.  However, that Rock; That Rock keeps me grounded.  It keeps me grounded in the midst of turmoil: relationship troubles, financial problems, teenage angst, childhood rebellion, infant tantrums, tumultuous emotions.  It doesn’t matter what is happening around me when I stand solidly on the Rock I know that I cannot fall.

I’ve mentioned it before (Loving a Person) but Hubs and I are off two different upbringings.  He was raised Catholic. I was raised in a smörgåsbord of Protestant denominations (part of being an Air Force Brat).  Now we attend a healthy, balanced Presbyterian church together with three services.  The earliest is very traditional, traditional music and communion every Sunday.  It is right up Hub’s alley.  The last service has a band; drums, guitars, a few singers behind mikes.  When they play music you can FEEL it; and it feels good.  The middle service is ours.  Common ground, hymns and  a mix of choruses with a choir of all ages up front.  We both stand firmly planted on the Rock and we stand together hand in hand.  It is such a beautiful feeling.

“On Christ the Solid Rock I stand.  All other ground, is sinking sand.”

Email ThisBlogThis!Share to TwitterShare to FacebookShare to PinterestMilitary Life:Leanne,Sermon Notes