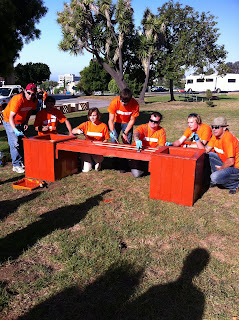 3 Doors Down and Kelly Cafferelli,
Home Depot Foundation President
Have you ever been excited about talking to someone who you respect? Yesterday I had the privilege of interviewing Chris Henderson of the platinum rock band 3 Doors Down. I am not the type to swoon over “star” personalities but this “rock star” came in the form of a veteran helping other veterans! Chris has served his country for 12 years in the Navy, Army and Navy Reserves. On this day the band was working with the Home Depot Foundation, The Mission Continues and local volunteers at the New Directions in Los Angeles. They were refurbishing the exterior grounds of New Directions, a nonprofit organization, which runs a residential program on the campus of the West Los Angeles Veterans Administration Medical Center. Chris was really excited about the effort and how hard everyone was working when I talked to him during their lunch break. 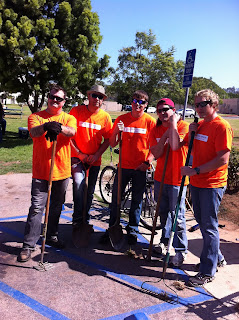 Chris Henderson, left w/ band The band has a long history of supporting the military community including Navy MWR (morale, welfare and recreation) tours and music videos with a military theme. Chris said the band “really believed in the US military” and recognized their “sacrifices” and wanted the military families to know they cared. The message he wanted to send? “Thank you for everything you do”. He said they will always be there for the military community! See why I was impressed?

3 Doors Down has also visited Walter Reed Army Medical Center, Bethesda Navy Medical Center (which are now joint) and other veteran facilities to encourage and support our wounded heroes. Their efforts in LA were to kickoff the Home Depot Foundations “Celebration of Service” to honor US military veterans. Chris said the Home Depot volunteers were extremely hard working and making the facility comfortable for veterans and guests was the goal of the day. The area will also include some playground type of equipment for children. Fred Wellman, of ScoutComms, who introduced me to Chris spoke highly of Chris and his work efforts too! So I had to ask if he had any blisters? He laughed and said yes. 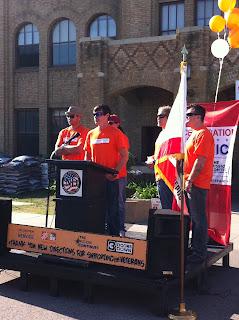 Brad Arnold, lead singer for 3 Doors Down Celebration of Service is “a campaign to honor U.S. military veterans, celebrate their contributions and provide support to nonprofit organizations that serve them.” According to the Home Depot Foundation, the campaign includes 200 service projects to be completed by Home Depot and The Mission Continues volunteers before Veteran’s Day on November 11th!

MilitaryAvenue plans to attend an event in Detroit for our veterans there during this campaign! So watch for more coverage of support to our veterans. 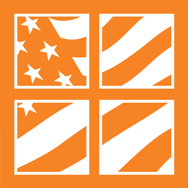 Of course, we need a big shout out to 3 Doors Down for their support to military heroes and their families!  Their video “When I Am Gone”! Enjoy and don’t forget to go to HomeDepot.com for “Time of My Life”.