I just returned from a great visit to USAA in San Antonio and had the pleasure of meeting a lot of great people, seeing a lot of great things up USAA’s sleeve and doing some super networking with fellow bloggers, military spouses and financial gurus.  (In fact, I frequently thought, “How was I so privileged to be invited seeing the room was full of such-experts.”)  What a wonderful opportunity!  The visit culminated with their 9/11 remembrance, “America’s Resolve”.  Our emotions were tested and kleenex placed at the end of every row.  Even saying the Pledge of Allegiance tugged at my heart and that was just the beginning. 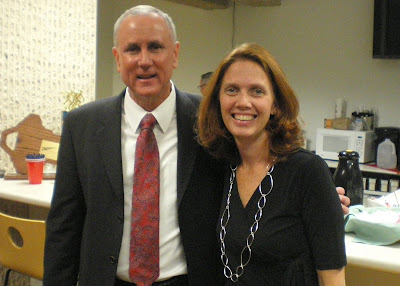 We listened intently to the keynote speaker; bated breath, thoughts of  “I can’t imagine”, and even smiles over a few moments of levity.  Colonel (Retired) Tillman, USAF pilot of Air Force One, described what he and his team went through on that fateful day as they kept President Bush safe as they traversed the great skies of America.

After he spoke to the hundreds in attendance at the 9/11 service he had a private meeting with the bloggers invited to the Bloggers Conference.  We asked some questions and he dived deeper into the nuances of being an Air Force member and what his Air Force One team went through.  We commented on how hard it would be for the families back home who wouldn’t be in contact with the Air Force One crew for some time for OPSEC reasons.  He even told us about boots that President Bush had made for Col Tillman with the Presidential Seal stamped into them.  SO COOL!

Then our day ended and many of us were off to the airport to head home to the families that love us, the work that called us and the stories to share.  I checked in at San Antonio’s airport.  Got all my bags ready to go through security, took my shoes off, laptop out of its bag, I even was asked to take my necklace off.  Then I saw him. There was Col Tillman getting ready to go through security in front of me, just like you and me.

Here is what strikes me: *THIS* is a pilot of Air Force One.  He had no direct-pass.  No skip through security because if you have clearance to fly the POTUS you probably aren’t too much of a security threat.  Nothing on his ID says “I flew Air Force One so you can let me keep my shoes on and let me bypass these crazy ridiculous lines.”  He was just an every day American to all those around him.  I can’t imagine that type of transition, from Military to Civilian.

I was happy to talk to Colonel Tillman a little bit as we both donned our shoes back on after clearing TSA.  I was honored to meet him yet again, and I told him as such.  I proudly told him my husband is a soldier – I am a military spouse; My father was also an Air Force pilot – I am a military brat.  When he asked what it was we did, why we were at USAA, I was pleased to say I *love* writing and that is why we, about 20 bloggers and writers, were invited.  (I was also quite tickled to listen to his voice just a little bit longer… Yes, sometimes I swoon and his voice was something to swoon over… but I digress.)

I thought about Col Tillman’s transition and what that would have been like with 30 years of service, from military to civilian.  While in San Antonio I also had the pleasure of meeting Chazz Pratt, a very like-able and knowledgeable veteran.  He is the ‘Going Civilian Community Manager‘ in the new Military Spouse Community at USAA.  If you will soon be transitioning yourself you are bound to find the help you need with great blogs by Chazz like, “Top 5 Things to Expect When You Decide To Get Out of the Military” or “Learning To Speak English Again” (and many more).

You can also find help for retirement or separation through your family programs on base or post; resume help and transition assistance as an example.  It is quite a culture shock for the service member and the spouse going from a 10-, 20-, 30-year career in the military to civilian life.  I am sure Colonel Tillman experienced that as he put his shoes back on after a jaunt through civilian-security.  I know my dad experienced it as he went from flying C-17s over Afghanistan, air-dropping needed aid, to working a high-end sales job for an airplane company.  I know someday my husband will experience it when he no longer has to worry about the soldiers in his brigade calling him at all hours of the day about trouble they have gotten themselves into.

Are you or your spouse going from military to civilian? What resources have you found to help?  What tips would you have for other families in your situation?  I can’t wait to read more about this topic that we will all someday face as military families.

I do want to mention that USAA did fly me out to San Antonio and took care of most of my travel.  But I can assure you that *that little piece of it* had no undue influence on my satisfaction with their company and my 22+ years of membership.  I am just glad to share their story with our readers.byUnknownonMonday, September 12, 2011

Email ThisBlogThis!Share to TwitterShare to FacebookShare to PinterestMilitary Life:Leanne,retirement,transistion,USAA

“almost” Wordless Wednesday: Pride in our Power & Love of my Heritage