American forces are preparing to leave Iraq on December 31st and in fact, some of our folks are “looking at their watches” but what have we accomplished after a war, the loss of too many American lives and huge expenditures of our national treasure?

Brig. Gen. Rock DonahueThose thoughts ran through my mind as I talked with Brig. Gen. Rock Donahue , director of U.S. Forces Iraq J7, the senior engineer in Iraq during the DoD Bloggers Roundtable. Gen Donahue carefully went through the statistics, the huge effort, that, our men and women in the military community have made to clean up Iraq during and after the war. He was proud of them, you could tell by his explanations of their responsibility to leave “a more stable, sovereign Iraq.”

Impressive to say the least:

We did not just walk off the bases and facilities but completed a detailed transition plan in accordance with international agreements, Central Command regulations and Army Corps of Engineer guidance. Transition tasks include real estate, property management, contracting and environmental oversight. A thorough hand off with a joint review with Iraqi leaders is the outcome. 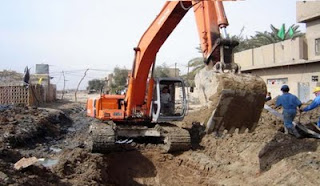 Iraqi workers dig a new sewer system in Oubaidi …
The “final leg of the journey” according to the general was the environmental cleanup, the providing of civil resources such as schools, medical facilities and power generation. He came prepared with statistics: 1,600 schools built, 7,000 megawatts of power generation, environmental clean up actions at 600 sites, $8 Billion spent on 5,000 Army Corps of Engineer projects and 30% of regulated waste being recycled. Human health and safety has been improved by our efforts and that training provided to Iraqis will improve their own country to a new standard is the hope.

Iraqi roads have been improved by our teams with 4,300 IEDs removed by 55,000 route clearance patrols since 2005. Bridges rebuilt and more than 50,000 kilometers cleared every month and now the Iraqis have their own equipment and personnel trained by the engineers. He feels “cautiously optimistic” about the outcome and when I asked if there was anything to cause a delay to leaving by December 31st, he said, “what keeps me awake at night”? “The time to finish projects”! It is an aggressive schedule and the final 41 facilities will be handed over on time. 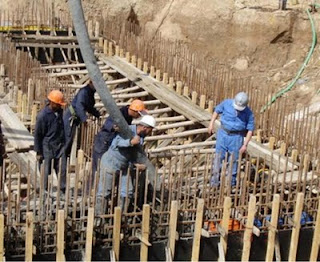 Iraqi workers place cement at one of four new pump…As we transition in our relationship, the Iraqis are looking at improvements to their own armed forces including training, equipment and new defense systems. The recent news articles, concerning the purchase of F-16 fighters certainly gives rise to hope for continued military cooperation. The final determination of success in Iraq will be decided in the future by political relationships, improvements to their standard of living, potential for a democracy in a part of the world filled by autocracies and many other factors! One thing is for sure, our military community sets a high standard and our hard work and sacrifice has had a lasting impact!

A big shout to all of our military service members who served during the Iraq war and their families who sacrificed as well!

All quotes are from Brig Gen Donahue.

Photo Credit: Army Corps of Engineers
Iraqi workers dig a new sewer system in Oubaidi, a neighborhood in Baghdad. Before the sewer project was completed raw sewage collected in the streets causing health hazards for residents. The new sewer collection system is now fully operational, having recently been completed by the Gulf Region South district of the U.S. Army Corps of Engineers.