It was fun and we laughed while talking about serious national and international security issues! Military family issues too. 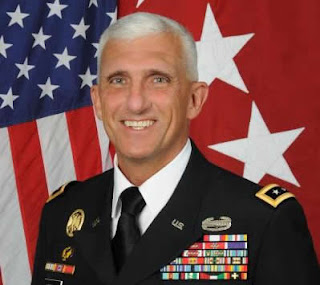 Lt Gen Mark Hertling, commander, US Army EuropeIt started out as another DoD/Army Bloggers Roundtable on a bright sunny fall day. The subject matter was interesting and the speaker one of our nation’s military leaders with combat experience and information to share. The discussion was intended to be focused on why the forward presence of US forces in Europe was critical to meeting our defense requirements but we jumped around the interests of everyone in attendance. Lt General Mark Hertling, commander, U.S. Army Europe, was on top of the issues affecting his troops, their families and the international players he works with every day. He was articulate, could laugh at himself and traveled to be in DC for an Army leader conference and to attend the AUSA conference on Monday as well. He took the time to talk to social media outside the mainstream which he obviously considers important.

The first question out of the bucket was how budget shortfalls have/would impact European partners’ military forces and their ability to meet security obligations. Many have significant challenges with their national budgets (even worse than ours in many cases). In fact, not one country is meeting the NATO requirement of 2% of the GDP for their military forces but General Hertling said, “Everyone is fighting above their weight class” as he praised their contributions and efforts. He added that the Army had conducted 8,000 exercises/events in Europe in 2010 (will be similar in 2011) and he had numerous antidotal stories about how they impacted our partners ability to get the job done. He spoke of a Polish brigade of 2,600 personnel being prepared for deployment to Afghanistan, command post exercises and smaller squad level training as well, which he considered to be critical to force modernization and training.

He said the biggest impact on the European military budgets of the current fiscal crisis will be on their equipment purchases. Which military equipment items to purchase with smaller budgets will drive force discussions within each partner. Priorities will have to be determined based on needs and requirements (he mentioned the choices of F-16s versus rifles as one dilemma). With fewer dollars the regions exercises will become more multi lateral than bi lateral to improve their effectiveness and reach. With very few conscripted forces, most of the Europeans forces are professional armies with similar “wedge” issues with their civilian populations as the US. He said this was why “he was here today” to tell the Army in Europe’s story. The undercurrent of limited connection with political leadership, civilian populations with little understanding of military lifestyle and sacrifices sometimes forgotten leaves many in the US military community concerned about their future budget battles as well.

He reiterated that budget issues were his concern and that lower ranking personnel should not be focused on them. With 10,000 soldiers deployed from his European units today, he wanted his folks to be concerned about the fight and people. I asked him how the Army was helping the families left behind during deployments in a foreign environment and he brimmed with enthusiasm as he spoke of assistance from the host countries. Host country leaders and citizens are providing concert tickets, free park access and attending welcome home events.  He felt that they were in fact watching over the families of our military community. He mentioned a memorial service for three soldiers killed in an accident after helping a local family with 200 Germans in attendance as an example of this support. In addition, the leadership of US Army Europe including the commander, deputy commander and sergeant major’s spouses conduct “community rides” to hear from everyone. The most popular method of getting information appears to be social media such as the Facebook pages of spouse groups according to the general.

We briefly jumped into the physical fitness of American young folks and how it was impacting basic trainees (similar issues in European armies).  We began by discussing bad knees and the Army Ten Mile Race on Sunday. We will leave it to say that Sue, the general’s spouse will be the Hertling name found on the roster.  Much like myself with four knee surgeries the general saves his physical training efforts to machines.

If you would like to read more about AUSA (Association of the United States Army) please click on the link provided.  They are one of the military associations/organizations we encourage everyone to join to have a voice that can be heard in DC while decisions are made that can affect your lives.

It was fun and we laughed while talking about serious national and international security issues! Military family issues too. Thank you Lt Gen Hertling!

If you would like to read a transcript or listen to an audio of this Roundtable please go to ArmyLive/DoDLive. For more MilAve_Col_K blogs please click on this link for Our Letters to You. A Military Family Blog/Col K