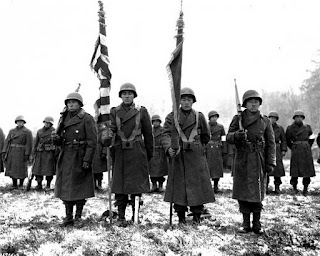 Members of the 442nd – See belowWe continue to highlight the efforts of our veterans to protect our freedom and illustrate why we celebrate Veterans Day! A ceremony in the nation’s capital will honor a special group of American veterans from WWII tomorrow. Many of us do not remember the fear after the Pearl Harbor attack of the possible invasion by Japan. I remember my grandparents and parents speaking of it fiercely.  Orders followed to intern Americans of Japanese descent in camps as a response to this fear. Imagine those Americans’ feelings!  Originally, some service members were released from active duty, many had families in internment and yet they were again ask to serve their country.  How in those circumstances could they have served?

But serve they did; and tomorrow their units will be honored with the Congressional Gold Medal to recognize their special service with the 100th Infantry Battalion, 442nd Regimental Combat Team and Military Intelligence Service.

The Congressional Gold Medal is the nation’s highest civilian honor and the ceremony will be conducted at the Emancipation Hall, U.S. Capitol Building, Washington, D.C at 11 AM tomorrow. If you are in DC as a tourist, live in the area or assigned nearby find the time to attend and recognize these heroes! If you are not able to attend in person, you can follow on a live webcast of the event at http://www.dvidshub.net/webcast/2087

Want to find more details? Here is an article by Rob McIlvaine on Army,mil, concerning two of the veterans: “442nd legacy takes Soldiers from ‘enemy aliens’ to heroes” and a blog from ArmyLive’s Ashley McCall-Washington, To Wager Everything

Photo Credit: US Army  Two color guards and color bearers of the Japanese-American 442d Combat Team, stand at attention, while their citations are read. They are standing on ground in the Bruyeres area, France, where many of their comrades fell.byColonel KonTuesday, November 01, 2011