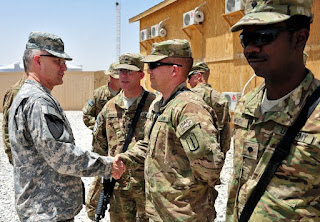 SMA Chandler with 170th IBCT (see below for photo credit)Sergeant Major of the Army (SMA), Raymond F. Chandler took some of his critical time to speak with the Bloggers Roundtable on Wednesday. He said felt like the lead Scout of the Army’s enlisted force and wanted to give us a feel of what the enlisted soldiers where concerned about and how the Army was dealing with their issues. The SMA was lively, interested in our questions and provided some great responses as he described an “amazing Army”. He told us we were at a crossroads in the Army with reduced budgets and a drawdown of forces that will impact everyone.

After he made opening remarks, I asked if he felt that the Army was taking care of the troops that were separating or retiring with employment information and assistance. He said this was a “huge concern” and that they were “doing the best we can”. Recent efforts within the Department of Labor, VA and White House have resulted in a coordinated program to meet the challenge (editor’s note, for example the recently signed “VOW to Hire Veterans Act”). The new Army Directive for the Transition Assistance Program within one year of separation/retirement is a step forward. The biggest challenge according to Chandler was linking jobs availability with individual soldiers. The increase in those leaving the service will definitely impact this effort as a drawdown of 50,000 troops is expected shortly.

SMA Chandler (see below for photo credit)How is the Army going to accomplish such a large drawdown was the follow on and he responded with a four point program:


3) Reduction in some rank structures at SGT and SSG levels

He then went on to say that the Army is “looking for the best and brightest” to serve and the reduction of 50,000 is set by budget and personnel ceiling limits. While it is a “privilege to serve”, he felt that the soldiers concerns about the budget, drawdown, and specifically changes to the retirement system and quality of life were an “issue of trust between the American people and their soldiers”. Bottom line for the retirement system is a commitment to retaining the current system for those currently in service.

At this point SMA Chandler was called away from the Roundtable to attend a no notice meeting with Secretary of the Army (we lost that rank battle) but we followed up with additional email questions below and a promise to meet again soon.  My written questions in bold precede his answers which are in italics.

I notice you are on Facebook and Twitter. How much time do you spend on social media and do you feel it is an effective tool to communicate with soldiers?

“I feel social media is a great tool to reach Soldiers and Family members I wouldn’t be able to reach as I travel from post to post. I get on my social media sites at least once a day to answer questions because I think it’s important that a Soldier or Family gets the answers they need. For example, one of the things I was inundated with when I first became the SMA was the beret. A lot of the feedback I received on that topic was directly from Facebook, so I think it’s a great tool and one I will continue to use in the future.”

Second, how safe do our soldiers and their families feel at home?  Specifically, the attacks on soldiers at Ft Hood and Army recruiters? Do they feel that the Ft Hood attack was “Workplace Violence” as characterized by leadership?

“I think that Soldiers and their Families feel comfortable with the level of security around our recruiting stations and our camps, posts and stations because not one time in the last nine months has anyone asked a question or had a comment about it.”

Finally, to keep up with the blogger Roundtable please go to DoDLive for transcripts. If you would like to read more of MilAve_Col_K blogs please go to MilitaryAvenue/Col K

Child Care for the Military Community Just Got Easier