I have a confession.  I love being organized.  You wouldn’t really know it when you walk in to my house.  We have had the pleasure of living in the same house for 10 years. (Clearly, I’m a National Guard spouse and not Active Duty.)  In those ten years my eight-year old step son has turned 18.  I have given birth to three boys.  My husband has grown his own private-practice and works 15 hour days.  I’m quite sure the family plots daily against my need to be organized.

My junk drawer has spawned and over-taken three drawers in my kitchen.  It is bad.  My basement some how became a great place to (quite literally) throw things when we didn’t know where to put it.  The boys bedroom (ages 6 and 9) was impassable.  Like a winter blizzard of toys.

And I settled into this serious funk.  Defeated.  Unable to handle the balance of work / mother / wife / Household 6.  Woe. is. me.  I’m realizing now this funk has lasted a good four or five years.  I didn’t know what it was.  I didn’t know what had me just feeling bleh.  I had no idea this lack of organization affected me like this. 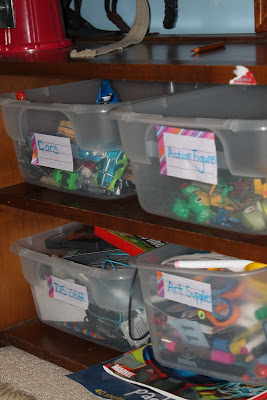 I’m a huge fan of ‘bins’, LABELED bins to be exactI started to see the light when with garbage bags in hand (three of them: (1) garbage, (2) recycle and (3) giveaway) my boys and I tackled their bedroom one day during Christmas break.  We started at 10 in the morning and were done at about 5pm.  It was grueling.  The 6 year old quite honestly thought I was torturing him.  The 9 year old declared tyranny.  I cracked the whip.  We worked for 40 minutes, took breaks for 20.  And when we were done? AH!  I honestly stood in the room and breathed in the feeling of organization.

The next day I tackled half of the basement.  (I didn’t torture the boys with this one though, quite possible for my own sanity.)  Toys were moved from the boys’ room to the “livable” (and yet when we started quite unlivable) side of the basement.  Boxes we didn’t need put in the recycler.  A space was made that the kids could enjoy!  When it was all done my eyes relaxed, instead of looking around at what needed to be done I looked around and saw what WAS done. 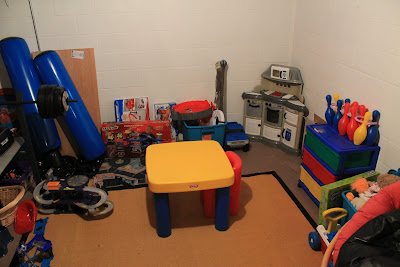 The Kids’ Play AreaWe still have some work to do. But 500% better then before my organization-spree and still very enjoyable and playable. Hubs needs to move his weight bench but we bought some boards (upper left corner) to convert an old dresser with drawers that don’t work into a shelf to hold bins.  I’ve mentioned I love labeled bins?  I got the idea on Pinterest.
For Christmas my husband got a new set of shelves.  Yesterday, we put them together and on the other side of the basement (the storage side) we completely re-organized and re did the ‘pantry’.  It only took an hour or two but after everything was on the proper shelf I stood there. I could hear my extra kitchen appliances and nick knacks saying THANK YOU, THANK YOU! 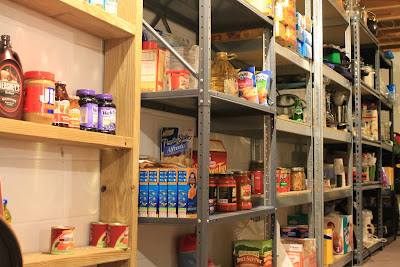 My basement-pantry
My husband has noticed a certain lift in my step.  I dance a little more, smile a little more, I just am a little more pleasant to be around.  Isn’t it amazing when you figure out what the problem is?  And then better yet, you do something about it?!  My next step… tackle the junk drawer and then my craft area.  We’ll get there.  In the mean time, I’m just happy to know how being organized affects me and the affect pleases all the senses!

PS – About a week later and the boys’ room is STILL clean.  Not only did we clean it but we /organized/ it.  Found easy places for things to go.  Moved lots of things out.  FILLED garbage bags.  I still enjoy walking into their room.  Amazing! 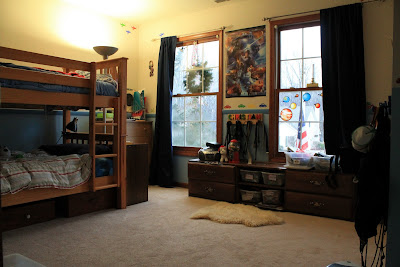 Email ThisBlogThis!Share to TwitterShare to FacebookShare to PinterestMilitary Life:Leanne,Organization