We are a country of generations, framed by them, marked by music we loved as teenagers, wars fought in each and of course, TV programs that we enjoyed. Each marks a different view of life and values in many ways as well. We find causes, issues that make us get involved and each is based on when we grew up.   Breast cancer awareness, the environment, Vietnam, the housing crisis, each mark a generation most involved or responsive to their cause or issues.  New issues and causes can appear for each generation at any time and I have found a new one to write about today.

Frequently generations disagree on the values and direction we are going.  The younger look ahead to new adventures, the older frequently look back at theirs and the middle just tries to keep up with their hectic schedules. 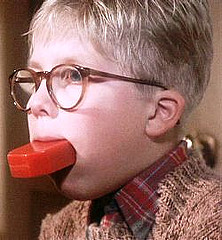 The memory of a small bar of soap and a parent or teacher saying, “I will wash your mouth out with soap” if you say that bad word again comes from my generation. Yep, they really did and yes, we were afraid of the threat (it did taste horrible). We did not use the tough language that the soldiers, steel workers, garbage men used – it was unacceptable. Frequently, we went running to a dictionary to find out what they even meant. So zoom ahead to this current generation of young people listening to music, sending texts, posting on Facebook, tweeting, watching movies and tv programs and yes, conversation filled with words that once were considered vulgar, insensitive, insulting and more. But is it really their fault?
Americans have become accustomed to people using this crude, offensive language on a daily basis. Think about the most offensive word that comes to mind. We do not blush when we hear it, read it or say it anymore. Words used to shock are now matter of fact and our comedians live off their steady use of these words that offend. Not surprisingly this vulgarity has entered our political discourse as well (reminded of a President/Vice President’s language caught on a mike). Descriptions of the opposition have become character and difference based and blasted with the foulest language! These are our leaders, our entertainers, our representatives, our politicians and those we respect. No wonder the younger generation says, “so what” to being crude. It is not crude anymore.

Col KThe entertainment industry has once again stepped over the crude and offensive line with a new program. I wish I could write this without cringing, but ABC is taking freedom of speech a step farther in the war on polite language and respect for all. Their Sunday evening program, “Good Christian Bitches” is just over the top offensive. Kind of ironic they decided to air it on Sunday, the day of worship for many American Christians. I do not buy the argument it is in the adult hour.

Sorry ABC! This is not a freedom of speech issue. Replace Christian with other groups like veterans, Muslim, black, Latino, progressive, conservative, Democrat, Republican, nurses, doctors; pick your group. Imagine the uproar if ABC had in fact, chosen a different group: riots in cities around the world, government investigations of racism in others, calls for revenge on writers, congressional hearings, etc. but the leadership at ABC is comfortable making Christians the target of this program and offending many of them. They just do not care that Christian and bitch are together in the title and must believe they will get better ratings. Who are the advertisers for this program? Their products/services must appeal to groups that find it humorous that ABC has titled and targeted a program this way.

So why should our young folks of the newest generation care? They have no example and the “little bar of soap” is not even worth discussing. I do wish the producers of this program and ABC would use a bar of soap to clean up their act!

I wrote to ABC about how this program title and theme offended me. If you feel the same be sure to let them know.  Maybe if they get enough feedback or lose advertisers the program will turn out to be a disaster for them – one can only hope.