He is what we would call a straight shooter!

Maj. Gen. John A. Toolan, Jr., U.S. Marine Corps, met with the DoD Blogger Roundtable to discuss Afghanistan after returning from a year in command of U.S. Marines and allied forces in the Helmand and Nimroz provinces of Afghanistan. He provided a sobering but positive perspective of the situation next to the borders of Pakistan and Iran and  the general was ready to share his thoughts on the current events in Afghanistan with the roundtable bloggers.

Celebrating opening of new women’s center
See Photo Credit BelowImagine a new cell phone network connecting villages, additional and improved roads laid down to make it possible for farmers and villagers to connect, the Kajaki dam controlled by the Afghan government and providing power and irrigation for the villagers, a security situation improved to the point that the Afghan government is seen as “the winning side” and you have described what the Marines, allies and Afghan security have done in the last year in two critical provinces!

However, remember, I called the general a straight shooter! Here is a paraphrase of what he said: All this can come apart if the Afghan government and security forces allow corruption to overcome all of these gains in the battle for the minds of their people. He described two types of corruption for us. First, the parasitic type of corruption is found in the central government, by officials at higher levels and is systemic. The second is more critical and belongs to the local security forces which he explained as predatory. Demanding payment from those using the transportation routes, confiscating land, etc., will have a direct impact on the lives of each villager and will anger them, turning them to the insurgents’ side. His concerns for the future include porous borders with the two neighbors in the southwest and the influx of personnel and weapons to support the “ruthless and murderous” Taliban insurgents.

Fruit  & Vegetable Processing
See below for photo creditCan the Afghan government security forces defeat these insurgents as allies pull back and security is up to the government? “I believe they will hold line” was the general’s response! According to him the security forces are better led, trained and equipped than their enemy. They do need time to season their NCOs and the police forces need better equipment to counter the Taliban IEDs which they face every day! Of course, they have need for training and intelligence and the key to the fight? Stay connected with the Afghan people and local stability to allow the police to become community police force versus a counter insurgency force.

What event, activity or act made you the most proud of the Marines under your command during the year you were deployed in Afghanistan? 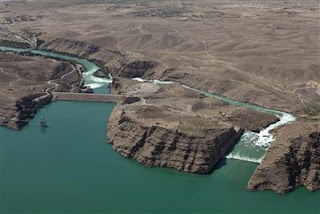 Tajaki Dam Helmand Province
See Photo Credit BelowI had to ask the Marine general this question. Taking a moment to respond, he replied with, the Tajaki dam military operation which shaped the security environment around the dam with minimal civilian losses. The dam had been taken over by the Taliban and water and power diverted to insurgent forces and the drug industry. With Marines, allies and Afghan forces back in charge the dam could support the power needs of the Afghan government and irrigate 650,000 acres of arid land. Locals are now siding with government forces and agribusiness is growing again.

The 1,000 kilometers (more than 660 miles) of roads added to the provincial transportation networks built by the Marines in the last year was his second note of pride! Changed lives … think back to cell phone connections, improved security for their families, new roads in extreme terrain, water for their farmland and government corruption on the mend. But a $1 Billion drug industry in Helmand province alone is still fueling the insurgency and in response Afghan security forces are suffering more casualties than allies according to General Toolan. They rely on our rescue, medevac and medical systems now and they will need them in the future as well!

Maj Gen Toolan,
US Marines
DoDLiveThe general had high words of praise for allied forces operating with U.S. military and Afghans as well. He described the British as a tremendous partner and Georgian forces as owning their own battle space and having coming a long way in 10 years. Other allies within the two provinces included Denmark, the United Arab Emirates, Jordan and Bahrain. Each country brought its own capabilities and skill sets to the battle according to the general. How did he close? “Things are good, not great”.

This roundtable was a great discussion and if you would like to hear an audio please go to DoDLive! Read more Afghan blogs on MilitaryAvenue’s “Our Letters to You: A Military Family Blog”.  The Chairman of the Joint Chiefs, General Dempsey just visited Afghanistan yesterday to find out how the Afghans were progressing as we begin another series of drawdown efforts.  We hope his report comes back with positive, straight forward notes like those of Maj Gen Toolan .