It was a simple project:  put on the new grill flame covers purchased at a big box store. The old ones had rusted and worn out and these replacements would “take a sec to put on ” and including time to wash and clean the grill … 15-20 minutes in a busy schedule.  Sounded simple! 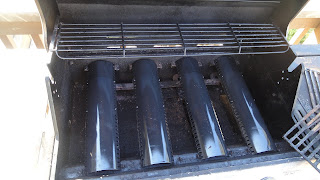 Flame covers that were maximum protectedThen came the packaging material on each of the four flame covers – very tough garage scissors were required to cut through the plastic on each one. It was not a simple process and each one seemed to take an hour to open to just remove the product.  Then the brain started working on the cost of the plastic …

After some contemplation on why it was wrapped so tight with such tough plastic, I realized that is was an industry standard product. I thought back to when a product like this could be picked up with a simple price tag on it. You carried it to the cash register, the cashier rang it up, buyer paid for it and took it home and installed it. What happened to change this process?

Enter “The Five Finger Discount”, shoplifting, stealing, whatever you want to call the epidemic of theft that hit American small and big businesses. Theft became acceptable for some reason – even cool – and its debilitating moral impact is felt on the every day lives of Americans! At first, the business community simply raised their prices to cover losses and we all paid for the thieves’ “free purchases”. When the profit margins got even smaller the stores took more measures – hiring security to protect their employees and watch for the shoplifters at work. They also hired lawyers and asked local authorities to prosecute thieves (Remember those signs – shoplifters will be prosecuted). Then we saw store wide camera systems, multiple tags on consumer items and electronic tags at the exit doors. Finally, they started wrapping items in the super tough plastic to add one more way to discourage the thieves from removing the items and hiding them. So here we are back to my plastic covered grill items.

It took me an extra 20 minutes to do this job as it took almost 5 minutes each to remove the four items from their packaging. Just think of the time alone and how it costs us to remove DVD/Game/CDs/other merchandise! Besides, I paid more for them and I had to throw the cut up plastic in the trash for the landfills later.  Recycling would have been nice but we do cans but not plastic in this area.  This has to be a major impact on our environment yet we hear little about it.

Thinking back to the additional costs I just walked through makes me sad. As a nation, we have done a much better job of addressing littering and its impact on the environment than an epidemic that destroys our moral compass and has such a large impact on consumers and businesses alike.

Maybe it is time we had a national campaign educating folks on the cost of “Five Finger Discounts”? Parents should set the example and talk about stealing: Why it is against the law and what it costs us on a daily basis! How about churches? When was the last time you heard a minister or youth leader speak out against shoplifting/stealing? What should be the role of schools? How about other national/local outreaches such as social media like Facebook and Twitter? Just think of political campaigns? What can we do to help? One personal decision at a time to get involved.

Increased price per itemSecurity personnelLegal staff for businessesLocal government cost to prosecute thievesSecurity systemsAdditional tags on merchandiseElectronic security at exitsIndustrial packaging materialsLandfills/Recycling efforts for packagingPrisons filled with many that started with a simple shoplifting rapA nation that needs a bit of a direction change in its moral compass
This is my list, I am sure there are other costs as well! What are your ideas to address this plague?