They just keep adding up for our military folks – challenges that is! But this one is pretty close to home and the safety of our service members and their families should not be compromised. Insurance industry giant, USAA has released the results of a study of post deployment auto accidents for military members and they have tagged a large increase for some groups following deployments. 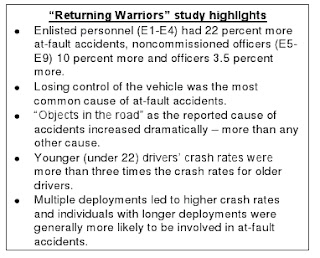 An educated guess of the results indicates a lot of habits formed while driving in convoys in combat situations (to stay alive) can increase the chances of having an accident at home. So the best convoy and combat drivers may be at risk at home. During a New York city trip to a wounded warrior event a military spouse related how her just returned husband responded to a police officer at the side of the road pointing a radar gun at their vehicle – it was not pretty to say the least.

I always drive with my headlights ON – why? – a habit learned while driving in Iceland for three years where it was the law. Now it just makes sense but driving through stop signs to stay with the convoy has some serious implications for drivers returning home after a year long deployment. The statistics get even worse for multiple deployments so a second or third return does not mean things will get better. Habits are ingrained and must be overcome.

After we re-posted the study from USAA, one follower of MilitaryAvenue commented on Pintrest that she usually drove for a while till her husband was ready. According to the study, accidents increased overall by 13% after deployment. A couple of us were chatting about the article and we were worried that insurance rates would also climb but the press release from USAA said,

But the company has no plans to raise auto insurance rates based on the data. Additionally, no information about individual members was released or reviewed as part of the study. “We’re highly, highly protective of our USAA member information,” Drew says. Raising awareness of the findings, especially among military safety commanders, was the priority, he explained. 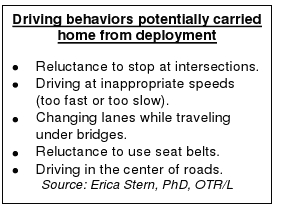 A call to action! First line of defense, the military services themselves to conduct education and additional post deployment debriefing. Next education efforts from the insurance companies to save lives like this study will do. Finally, the last line of defense, the military family members! Give your soldier, airman, marine, sailor or coastie a break at the wheel. Let them enjoy our beautiful countryside as a passenger for a while! Not always easy but it might just save everyone from the pain of an accident or worse, loss of an innocent life.

For further information about the USAA study please go to this MilitaryAvenue Reading Room article. Thank you USAA for providing the report and data to support!