Are you a soldier’s spouse, ready for something knew, fewer deployments, going back to school or maybe your soldier sees civilian employment on the horizon? Or are you a soldier that realizes the value of service, enjoy your Army buddies, ready to go home but want to remain a part of the Army? Or maybe uncertain financial times might make a part time check appealing while you get your feet on the ground? 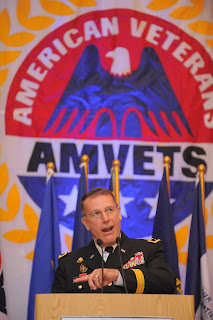 Major General Thurgood speaking at AMVETS conventionMilitaryAvenue had the unique opportunity to talk with someone who cares about these soldiers and their families! Army Reserve Major General Keith Thurgood is Deputy Commanding General (Support) and Chief of Staff of the Army Reserve and he had been invited to speak at AMVETS National Convention where he addressed the “Army Reserve’s support programs for veterans and service members, how to transition smoothly from Active to Reserve service, and the opportunities the Army Reserve offers for Veterans and Soldiers.” The general took time out of his busy schedule to highlight some of these issues with us.

The biggest challenge right now for the United States military services and specifically the Army according to General Thurgood is how to maintain the tremendous capabilities we have developed during combat for the last 10 years while drawing down our forces. He said we need to provide a seamless and easy transition for active duty soldiers to the reserves. To become a Soldier For Life means that we must connect the talent to the right job fit. Putting the old round peg in the square hole just does not work in an Army as talented as we certainly have today. It is great for America that we can now be selective on who transitions into the Reserves! They are looking for the best.

I was excited to find out that they have a family support website, Army Reserve Family Programs and how they recognized the role of the family in our soldiers’ service.  Their motto, “The Strength of Our Soldiers comes from the Strength of their Families” is right on the money!  Many younger service members do not recognize or know how far we have come in support and recognition of the role of the military spouse and family in the success of our forces!

The Army Reserve currently meets its end strength manpower and is working on “making room” for those highly skilled active duty soldiers that may want to be part of the reserves. A Reserve force that mobilized 256,810 soldiers since 9/11/01 for more than 90 days (anything less than 90 days is not included) and provided so much capability. Medical, military police and civil affairs were just a few of the MOS’ he mentioned where the Reserves provided 50% or more the resources for the joint commands. It was/is critical for the Army to generate forces that have a predictable deployment and training cycle. For the Army Reserve, a unit should know that they face a deployment “window” in the fifth year after a training buildup.

We briefly spoke about the Department of Defense budget how it might impact the Army Reserve. But he seemed a bit reluctant to travel on that road, simply saying that the Army Reserve “will do whatever it takes” and that he expects no short term issues for the AR. But he was at the AMVETS Convention to show support, engage with them and to tell the Army Reserve and your story to this superb military support organization.

He said that we have some great military support organizations that are advocates on our behalf for issues such as quality of life and resilience of service families. As we have written before it is smart money to join a military support organization to have a voice in DC that cares about your service. In addition, many such as AMVETS provide transition services for you and your family. In fact, personal experience is that one of these organizations knew how to deal with the VA better than I did when I came off active duty. They helped with paper work that was foreign to me and my transition went through smoothly!

I asked General Thurgood a last question, who were the Army Reserve Heroes and could he share one with me.  He thought for a moment and said there are so many… later his staff sent me a few heroes in action so I thought I would share them with you:

Col K is a retired USAF pilot that enjoys supporting the troops through writing for MilitaryAvenue!  He and his wonderful military spouse, Deborah moved 18 times in 30 years of military service, are blessed with 10 grandchildren, are both cancer survivors and feel very fortunate to be Americans!byColonel KonFriday, August 10, 2012