Fairy tales often start like this: Once upon a time… But our military benefits are not the things of fairy tales, they are earned and deserved! Some colleges have been less than honest with our service members while taking their benefits. It only takes a few to leave a bad taste. I can personally relate as:

Once upon a time, a Lieutenant signed up for an advanced degree program, drove 100 miles roundtrip for classes, spent hours studying and preparing for assignments while working a more than full time job and then received orders overseas. Two courses completed, in the bank for when the next opportunity arose several years later.

When I signed up for the next program; Surprise, surprise the “wicked witch”* announced that the classes were not transferable”. In fact, though described as advanced degree courses, the transcripts showed undergraduate course credit. Wait, I had been enrolled in an advanced degree program and the courses were paid for by the GI Bill at the rate for advanced degree hours.  Language in the transcript detailed that they were prerequisite courses, something that the school never explained.

So it was with great interest as we dialed in for the Blogger Roundtable with Carolyn L. Baker, chief of Voluntary Education Programs at Military Community and Family Policy at the Department of Defense. Carolyn was there to discuss the DoD revised Tuition Assistance (TA) Memorandum of Understanding (MOU). The implementation date has slipped until 1 March 2013 from 1 January to allow additional time for schools to sign and get the MOUs in place. In response to veterans’ organizations that were concerned about the “transportability” of course work into veteran programs (such as the GI Bill ) and participating college inputs, modifications to the MOU had been implemented late in 2012. 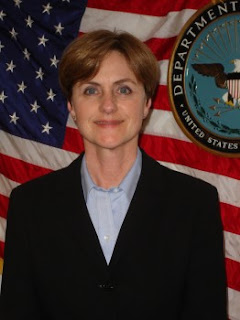 Carolyn L. Baker – DoDLive PhotoMs. Baker added detail to a DoD article on the requirements and what the schools needed to do in order to be qualified for accepting students using TA. As of 1 March if the school has not signed the MOU, they will not be available for military students using TA as a form of payment. There are 2,400 schools participating and about 50% are public and 50% for profit schools. So are we limiting the student’s freedom of choice and what is the impact on the students?  She said “there is no impact on the students” and further explained that 95% of the military students are in high enrollment programs that have or will have MOUs signed by the cutoff.  The TA policy for students has seen no changes!

What about the impact on the schools? While there are apparently some concerns about meeting the new requirements, the DoD is committed to the program and it reflects the President’s Principles of Excellence.  Increased oversight by a third party review (as identified in the MOU) will insure that the schools honor the requirements and guidance in the MOU and provide the students the biggest bang for their education buck!

This was a great discussion so if you would like to listen to it please go to DoDLive for an audio transcript. For additional information on military education issues, official government links and other information please go to MilitaryAvenue’s Education Center!

A member of a proud military family that created MilitaryAvenue.com to support the troops and their families, he enjoys the continued military ties from blogging. byColonel KonThursday, December 13, 2012