How often do you take the road less travelled?

Driving home from a weekend with college friends. A trip across state lines, many state lines. Time with just hubs as my boys were at home with Grandpa and Grandma. Ahead of us was Breezewood, PA and hubs was already grumbling about that “gosh awful” interchange.  (I just might have edited that grumbling to make it more family friendly.)

A last minute decision between the two of us and we found ourselves driving the passes of the foothills of the Appalachian Mountains instead. It was white, pristine, beautiful, a lovely change of pace. The Cumberland valley was wind swept, quiet, peaceful. The countryside was worth the 20 minutes added to out ETA.  (We were thankful for our GPS and my cell phone as we could easily tell we were on our way home.  Just a different way.  He drove, eyes on the road; I navigated, eyes on the hills.) 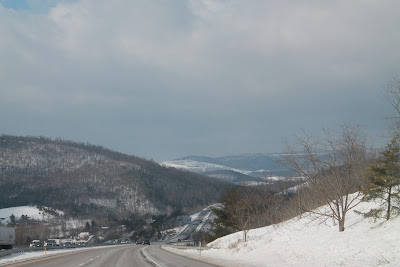 A trip with no kids in the back seat, just me and hubs in the front.  He was the pilot.  I was the navigator.  It was an adventure (a short one at that) not to be forgotten and smiles from here to the moon.  It was a quick but comfortable decision to drive off our preplanned route. What have you done to break up your trip? 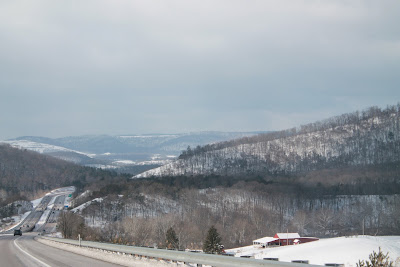 This is an important PSA from USAA.com

“USAA is known for having a culture of service, but we wantto foster a culture of safety, as well,” says  Joel Camarano,executive director of auto underwriting solutions at USAA. His team isspearheading distracted-driving education awareness, along with other safe-drivingpilot programs and recently sponsored a Distracted Driving Summit in Florida.

And, while people acknowledge they know it’s dangerous, theyare [not] willing to change their habits. According to studies cited on distraction.gov:

Take the pledge.  I know I will…

Email ThisBlogThis!Share to TwitterShare to FacebookShare to PinterestMilitary Life:driving,Leanne,USAA