“Due to budget issues, Fort Bragg is cancelling its 4th of July celebration and reducing services in many other areas.” – Fort Bragg Family and MWR

The 2013 Air Show has been canceled due to the impact of federal government sequestration budget cuts on Department of Defense and Aerospace Industry support of public air shows. – Cleveland National Air Show

Air Combat Command Stands Down Units Amid Budget Cuts: According to Air Force Gen. Mike Hostage, the ACC commander, “Historically, the Air Force has not operated under a tiered readiness construct because of the need to respond to any crisis within a matter of hours or days,” Hostage said. “The current situation means we’re accepting the risk that combat airpower may not be ready to respond immediately to new contingencies as they occur.” 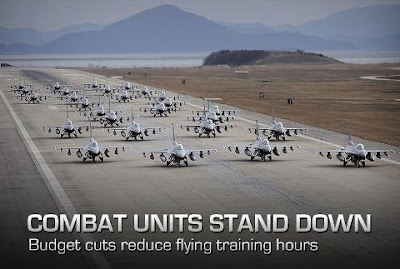 Photo Courtesy: National GuardWhy are we putting our National Security on the line?  Why are we making cuts that will affect our freedom, our 4th of Julys, our pursuit and celebration of independence ?  I completely understand budgets and the need to watch spending but if I were to look at it from a ‘household budget perspective’ I would cut entertainment (vacations, Mr. President, as an example) before I would make cuts that affect safety of my family.  I would think about the money I have thrown away because others were unprepared (medical care for illegal aliens), before I would make budget sacrifices for my own children’s future.  If I were to be making the budget my family, in the broader picture, my nation would come first.

For starters, Air Shows (as pure entertainment as they may seem) draw in thousands of people every year.  Six-, Ten-, Sixteen-year olds MARVEL at our airpower, ground-power, sea-power, Marine-power.  They look up at these shows and begin to think about their ‘future possibilities’.  Who their heroes are.  Who they want to be.  I’m sure today there is an immeasurable number of airmen, soldiers, marines, sailors or coast guard that first because to think about their future in the military as a youngster at an air show or other military-event.

Here’s an interesting tidbit that my husband shared with me the other day.  Free and Reduced Lunches were brought to use by the National School Lunch Act in 1946:  “The legislation came in response to claims that many American men had been rejected for World War II military service because of diet-related health problems. The federally assisted meal program was established as “a measure of national security, to safeguard the health and well-being of the Nation’s children and to encourage the domestic consumption of nutritious agricultural commodities.” – SchoolNutrition.org

If we saw back then the impact of childhood on the faces of our future military, shouldn’t we still?  And that is just a drop in the bucket.  Did we not all witness and feel deep despair around 9/11/2001?  If we cut back our defense now, back off on protecting our borders now, Stand Down now when will the next terrorist attack be?

These are just the thoughts of your every-day Army National Guard Wife… the mother of four (one is off to Boot Camp next week!)… the daughter of an airman.  I don’t live near a military base although I have for more then half of my life.  I can image that my local cities will still have their fireworks this summer.  I sure will miss the Air Show this Labor Day weekend in Cleveland; we go every year.  But certainly of utmost importance is I would like to see the military-budget not looked at as a luxury but as a necessity.  If we were willing to make cuts across the board (yes, your salary too Mr. Senator) and not huge chunks of National Security money then maybe we could all enjoy “The Sounds of Freedom” this summer and for years to come!

Email ThisBlogThis!Share to TwitterShare to FacebookShare to PinterestMilitary Life:2013 DoD Budget,Jumping on my Soap-Box,Leanne

My 5 Minutes of Fame